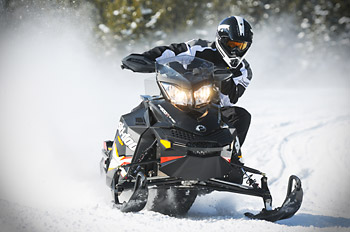 The big 2012 news from Ski-Doo is in the acronym “R-Motion”. We think it’s an acronym but we’re not sure exactly what the “R” stands for.

We’re guessing “Rising Rate”. However, there’s more to the new skid than just this one element. R-Motion increases suspension over the former SC-5 and ends up leading the industry with the most real rail travel (not rear tire travel) without increasing ride height one millimeter.

We would have thought, after all the variations we’ve seen on the ubiquitous snowmobile skidframe, the potential for packaging shocks, springs and swingarms would be completely maxed out.

The R-Motion gets more travel out of the same ride-height by allowing the entire package to collapse deeper into the tunnel.

How deep? The XP’s running boards are now one inch off white-top when the skid is bottomed out front and rear.

This increase in travel is mated with a true rising rate response to impacts when measured at the rear arm shock absorber.

The twist and the root of inevitable arguments to follow, is the issue of the R-Motion’s torsion springs. By their very nature they are not fully rising rate through the entire range of travel.

Doesn’t matter to us. What does matter is the ride.