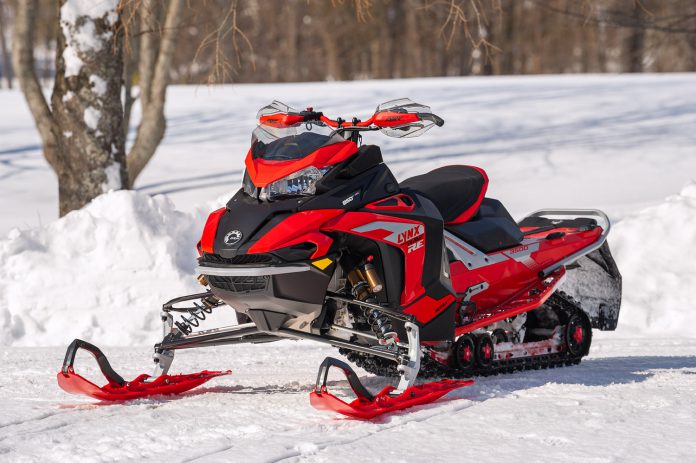 You’ve probably seen our YouTube videos describing the unboxing, tech description and comparison of the new Lynx to the Renegade X-RS. Those videos provide pretty much all the technical detail you need on this new-to-North America BRP snowmobile.

What everyone is waiting for is a detailed overview of what it’s like to actually ride the new Lynx RAVE RE.

Luke will be going into greater detail on that topic this week with a full test ride but we thought we’d throw in a few initial impressions from a couple of hardcore trail riders.

We paired the new Polaris (2021) VR1 850 with the new Lynx on a 30-mile trail ride a couple days ago and, switching back and forth, got some pretty clear impressions of the new RAVE. The trails were a good mix of recently groomed and long overdue groomed and moguled up snow.

First, we’d like to underscore the fact this is not a Renegade! This sled is completely different in its riding demeanor in nearly every way. Second, we’re not going to draw any comparisons between the Lynx and the VR-1. We’re saving that info for a later reveal.

However, we are going to tell you about some of the striking behavior we observed with the RAVE.

As longtime worshipers of the rMotion skidframe, we need to make it very clear, the RAVE’s PPS3 suspension in no way performs the same as Ski-Doo’s rMotion on trails. SNOWTRAX TV’s Luke (Lester) has described the RAVE’s skid as being “very aggressive” and “race-like” and that is 100-percent true. Is it rideable on trails? Yes, we think so. However, even at the suspension’s lowest settings it does not have the plushness of rMotion (what does?).

There is a way to ride this sled and it involves more physicality than some riders may be willing to exert. PPS3 demands a throttle-on attitude and really surprises when you ride it that way.

Here’s an example: Suppose the trails haven’t been groomed for a few days and you’re riding over those tedious four to six-inch-deep rollers that start to drive you crazy after a while. With the RAVE, you don’t slow down. Instead, you stand up and apply MORE throttle, weight the back of the sled and let the skid skip over the tops of the moguls like a motocross bike. Don’t kid yourself, this takes some arm-strength and a definite sucking in of the gut as you imagine the sled getting sideways or kicking up in the air and veering toward the side of the trail.

Surprise! It never happens. Stay on the gas and this sled stays arrow-straight, no fishtails, no bucking upwards at the rear, no scary surprises! This type of terrain is the RAVE’s playground.

We think the PPS3 has been designed specifically to operate at its best when the skid is “preloaded” with power going through it. This behavior is similar, to a much bigger degree, to what you got with Arctic Cat’s original torque-link equipped skid when you put power through it.

Torque links tend to drive the track deeper into the snow, allowing the suspension to use all of its travel and hold the front end of the sled higher, keeping the skis light – as long as you’re on the gas!

Yes, other OEMs have adopted the torque link as well and it’s been proven very effective in cross country and snocross. The principle is the same with PPS, only magnified many times more. It feels like the whole skid is working like a torque link.

So, where does this leave the consumer? Sure, by comparison, this is a very nice-looking snowmobile – maybe the best-looking sled this year – and has the cachet of being from Europe. Really, it’s like having a Porsche in your garage. This is a sled for rough trail purists, appealing to those who don’t just THINK they would like a sled this aggressive.

Remember when the first Cat RRs and Ski-Doo X-RS series came out? Some thought their prayers had been answered – but those sleds, in near-racing trim, were just too much. As soon as the shock and spring rates were dialled back, those “race edition” sleds started to sell like hotcakes.

That won’t happen here. With those huge 46mm KYB Kashimas all around, there’s certainly the possibility to make the lowest damping settings more plush. However, this is the sled’s appeal. Ultimate terrain prowess. Don’t try and chase your pal into the big bumps if he or she is on a RAVE Lynx. You simply cannot go faster in the whoops than on this sled.

Clearly BRP is happier keeping the RAVE’s appeal targeted at a specialized segment of the market and giving those riders more than what the average semi-aggressive trail rider is shopping for.

From what we’re hearing, we think the plan is going pretty well after 6 days in the market!