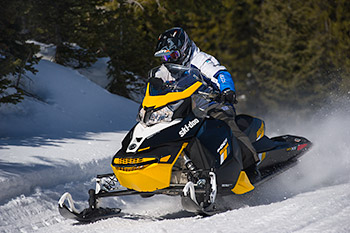 Ski-Doo’s new Blizzard is similar in many ways to the MX-Z TNT line-up but offers several features you can’t get on a TNT. We’ll explain.

The Blizzard uses the new 129-inch track and skidframe standard on all 2016 MX-Zs with the exception of the TNT and the Sport series.

Although its non-reservoir shock package is exactly the same as the 120-inch TNT, the Blizzard’s use of the new, longer track enhances its bite and its braking considerably.

Riding the Blizzard generated absolutely no sensation of handling compromise and the sled feels every bit as nimble as a 120-incher and definitely turns in quicker than a 137.

The Blizzard’s rMotion skidframe is calibrated impeccably and we felt it was much more compliant than the XR-S and even the X-Series when riding stutters and normal trail junk at speed ranges from 30 to 50-mph. Keep in mind the Blizzard shock package does not include damping adjustability.

The front end is great at absorbing impacts at the above speeds and the whole thing adds up to a sled that rides beautifully under about 75-percent of trail conditions.

Speaking of the front end, the combo of RAS 2’s higher roll center and the new Pilot TS adjustable skis Ski-Doo has come up with for MY2016 provides very precise cornering in soft snow, hard-pack and even icy conditions.

There is a 5-lb weight penalty (per ski) with TS (tuneable skis) but after riding with them, we’d find it difficult to go back to regular skis again. It’s pretty clear this feature is targeted at trail riders and not off-trail riders riding powder and obsessed with extra weight. However, in its wheelhouse (trails) it’s a fabulous addition and worth the extra bucks.

One feature we felt was huge on the Blizzard is its standard-issue Ice-Ripper track. Ski-Doo is including this track in many of its sleds this year on its early-order programs and even in-season sleds and it makes an incredible difference.

With steel “studlets” (new word) imbedded at the tips of the track’s lugs, it gets excellent grip both going forward and sideways and has the potential to be a lifesaver when grabbing the brakes on icy trails. This is a feature we’d like to see on every sled someday.

The Blizzard is available with choices of 600 and 800 E-TECs (we didn’t notice any appreciable difference in engine performance this year but feel the Ice-Ripper will add to acceleration specs), the 900 ACE 4-stroke and the 1170cc 4-TEC with new Intelligent Throttle Control (iTC).

Kent Lester
Kent Lester is Co-Publisher of SUPERTRAX Magazine and a regular contributor to this website.
Previous articleBRP ADDS MORE COLORS TO SKI-DOO MODELS
Next articleRIDING THE 2016 SR VIPER TURBO 137