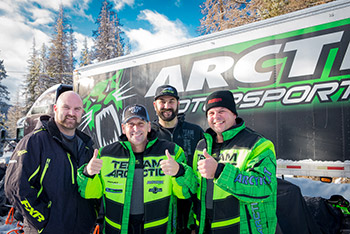 Supertrax’s Mark Lester received this great letter from this year’s 2015 Arctic Cat Ride More Contest winner, Jeff Meilahn, after he had joined Arctic Cat and the Supertrax-SnowTrax TV crew at Togwotee for some riding before receiving his choice of a brand new 2015 Arctic Cat snowmobile.

I wanted to drop you a quick note and personally thank you for your part in the contest I won.

Without you guys there wouldn’t have been the contest and I know there’s a lot of work and behind-the-scenes stuff that goes on to make it all happen.

Myself and my bro had an amazing time up at Togwotee Mountain with the guys from Supertrax. Your guys are 100-percent professional but also 100-percent a blast to be around.

I think we all hit it off really well from the get-go and it made for a super fun time. Luke handled us like friends from start to finish and I will always be grateful and remember this trip because of that – and man, can that guy ride a sled! Holy smokes!

The people at Arctic Cat followed suit, as well. It seemed they knew who we were before we got there and welcomed us with open arms and also treated us like we were part of their team the whole time we were there.

I hope we did all you guys justice by being there as guests, and I truly believe we did ! I really can’t think of anything that I would’ve changed or liked to see done differently. If I had it to do all over again, I would do it the exact same way from start to finish. It was a superb weekend and I think it went down flawlessly.

I hope Luke and the rest of the crew there feels the same. I think my fear of the camera even kind of faded before it started to show, so I hope I did my part in making sure you guys got what you need for a great show and that we also helped in making the whole trip a great time for your guys too because we definitely wanted them to enjoy this trip as much as we did.

Mark, again I just have to tell you this experience has been over-the-top for me and something that I surely appreciate more than I could ever express. Thanks Bud. I hope to meet you in person sometime in the not-so-distant future. Have a great snow season. Happy holidays to you and every one of your crew.

Watch for coverage of this event this season on SnowTrax – returning in December!!