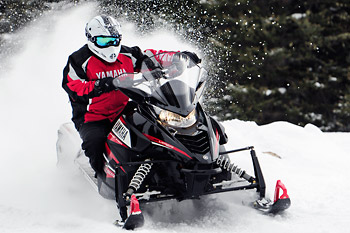 A couple of weeks ago Supertrax had the opportunity to ride all the new 2014 models in Montana. Just so you know, the elevation was about 6,600 feet above sea level, so some of our engine evaluations are tempered by the high altitude. However, we did get a good chance to check out suspensions, clutching and handling on the key new sleds you’ve been waiting to hear about. Over the next days we’ll be filling you in on our riding experiences with these new sleds.

This is the sled so many readers have been waiting to hear about. We deliberately chose the 137-inch Viper here because it was the one that impressed us the most.

The slightly longer 137 track combined with the calibration of the 2-way coupled falling rate skidframe equipped with a sliding-style front arm and torque links on the rear arm delivers a premium ride.

The SE version with air shocks on the front is a slight bit less compliant at trail speeds but still close. We think the ride quality of the coilover equipped version is the best overall, however, and certainly amps itself with the 137 inch length.

The engine? All we can say is WOW! This is the sweetest sounding 4-stroke mill – and nothing has been compromised with the loss of rear exiting exhaust.

Its power delivery is just too suh-weeet! There’s no throttle lag, it has a midrange hit that makes you run for the Kleenex box to stop the nosebleed and then revs out smoothly and with big-time authority to the big end.

Remember how we’ve always stated that 4-stroke engines in the Cat ProCross chassis feel more like 2-strokes the way they handle? Yup, this one makes you forget it’s a 4-stroke. There’s very little push in the corners; the sled feels balanced and light – very neutral.

The biggest deal will be calibrating Yamaha’s clutches to work with this package. While we were at West Yellowstone a bevy of engineers were working feverishly to dial in the Yamaha clutches (the decision to go with Yamaha clutches was a fairly late development) and they were making real progress.

We think this package is gonna be a very good one and is certainly good enough to convert some 2-stroke lovers over to 4-stroke.