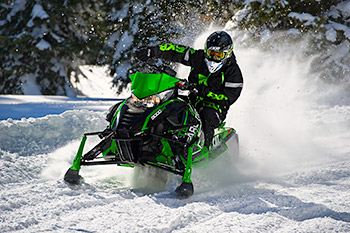 If you’ve ever wondered why Arctic Cat keeps building what appears to be a single-minded sled for a very narrow market, you need to beg, borrow or steal a ride on the 9000-Series Turbo.

We fired up our 2015 9000 press unit as soon as the lake was safe for speed testing and with only a few inches of snow over glare ice (thankfully, Birchpoint Cats had installed some studs in its track) we saw an indicated 111-mph on its digital speedo before we backed out of the throttle – and the sled was still accelerating hard! A couple of days later, conditions were even better and we saw 118 before backing out – and the sled was still accelerating hard!

This wasn’t fingerwalk accelerating either. The sled was pulling so hard at those numbers and doing it with so little fuss we began to wonder just how fast the thing could go. Frankly, we don’t recommend you test this sled’s limits without super-safe conditions and a Medi-VAC nearby.

Okay, Cat sez the sled makes 177-hp. After riding it we did the same run with an 8000 Cat and its usually impressive 162-hp 800 2-stroke felt like it was stuck in neutral by comparison.

Hey, there’s only 15-claimed horsepower difference, right? It feels like 50. The Turbo has such a broad torque curve, the engine just pulls and pulls. We think it must start making big power at about 4000 RPM and then just keeps building. At top end, the sensation is flat-out incredible!

Another thought: This is an amazingly durable engine. We know of hordes of these that have been jacked to 250-hp – that’s another story completely. However, there are versions of this mill that are making 400-hp and living to tell the day. This Suzuki-built DOHC 4-stroke twin may sound like an irrigation pump but it’s as tough as an anvil.

We hope Cat never stops offering this sled. It is truly legendary.

Kent Lester
Kent Lester is Co-Publisher of SUPERTRAX Magazine and a regular contributor to this website.
Previous article2015 SKI-DOO MX-Z ACE 900
Next articleTEAM ARCTIC WINS MORE AT USXC IN GRAFTON