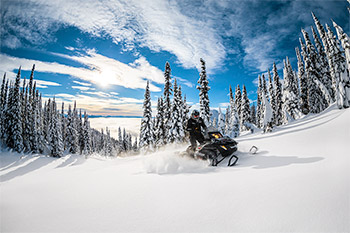 After less than one week of intense voting it’s clear, snowmobilers are excited about Ski-Doo’s North America’s Top Snowmobiler Competition.

Snowmobilers are voting by the thousands and each nominee’s percentage of votes in this first round is on display at supertraxmag.com/nats for all to see. You need to keep voting every day!

There’’s been a huge response to both Matthew Corbeil and Kevin Hanlon who posted entertaining and compelling video bios.

Matthew Corbeil’s bio was so professional we might use his cameraman on SnowTrax Television! Other first round nominees have interesting bios.

You can read and decide for yourself who you will vote for at supertraxmag.com/nats. Remember, you can vote once a day every day for your North America’s Top Snowmobiler nominee!

Already We Have Winning Voters!

That’s right! We’ve awarded the first voter prizes! Tons more winners will be announced each and every week of the North America’s Top Snowmobiler Competition.

Congratulations and thanks to John Strandmark for his participation in casting a vote for North America’s Top Snowmobiler!

John was randomly drawn as the lucky recipient of a BV2S Modular helmet from (@skidoo facebook link) Ski-Doo Accessories.

Continue to cast your vote daily for the current round of nominees at supertraxmag.com/nats. We’ll be giving away another awesome prize package from our list of sponsors to a lucky recipient soon!
Click here to learn about the BV2S helmet.

Brandon Dumouchel has won a $300.00 Woodys gift certificate! Looks like his carbide budget is looked after for this season! Check in often for more prize winners!

You Can Still Nominate Yourself!

It’s easy to submit your nomination at www.supertraxmag.com/nats . Get ‘er done today!

Keep On Voting – Keep On Winning!

The top three nominees from this first round will move on to the finals. On Friday October 23rd six new nominees will be posted! Every time you vote you increase your chance to win exceptional prizes!

Staff Report
Previous articleAre You Riding the Most Advanced Snowmobiles?
Next articleARE YOU ACTUALLY ADJUSTING YOUR SUSPENSION?