POLL RESULTS: Exactly What Will Cat’s New 600 Be? 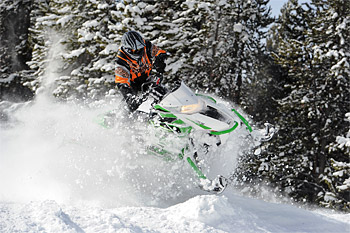 Wow, it looks like we really stirred the pot with our last Online Supertrax Poll on this website. About a month ago we started the rumor about Arctic Cat’s new 600 2-stroke (if, in fact it really exists) possibly using Yamaha’s retired outboard 2-stroke DI system called High Pressure Direct Injection (HPDI).

Seems it got everybody’s juices going and the results of our poll show that fully 47-percent of those that responded believe this system will be what Cat will use in a new-generation 2-stroke. It’s a pretty big stretch to think Yamaha would sell some of its most prized technology to a direct competitor.

Anyway, 25-percent of you think it will be an SDI (semi-direct injection) engine similar to what Ski-Doo gave up on and what Polaris now uses with Cleanfire.

17-percent think Cat will stay with the same EFI system it’s been using on its 800 (exhaust sensor tied to the onboard computer) and only 12-percent believe Cat will use a low pressure DI system like Orbital.

Now that the truth is coming out, we personally would bet money on it being the last and least popular choice – Orbital.

Why? This technology is the least intrusive into the competition’s territory and the most readily available from a licensing perspective.

Hey, who knows? We’re anxiously waiting for Sneak Peek in Minneapolis in a week or so to see what Cat is coming out with for MY2014.