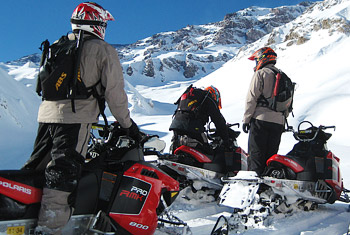 This summer Polaris took a fleet of first-off-the-line, actual production 2011 sleds and shipped them to the Chilean Andes in the southernmost part of South America!

The plan was to ensure everything they had promised with the prototypes was delivered once the production lines began running.

Further to this incredible investment in product integrity we had the opportunity to tie Mike Bedard to a chair and poke him with a cattle prod while we questioned him about the performance of the seriously updated Liberty 800 Cleanfire.

Our mission was clear: We wanted verification that what we had experienced last March in Yellowstone when the pre-production prototype Rush 800s ran dead-even with the potent new Ski-Doo 800 E-TECs, was duplicated in production sleds.

Why? There was much angst in the other camps at Snow Shoot and even some cries of “foul” and “ringer” when the re-invented 2-injector 800 Liberty ran way strong.

Bedard, more willing to talk after a few 100-jigawatt stabs, had this to say when quizzed about the production replication of the West Yellowstone proto performance: “Absolutely, 100 percent the same power, acceleration and performance as you guys saw last spring.”