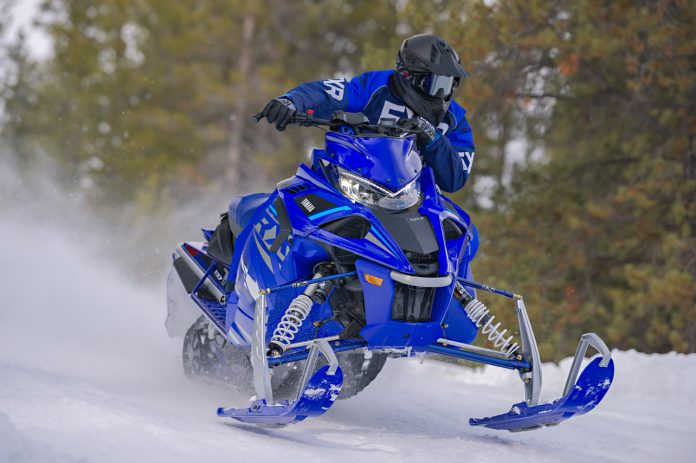 For those of you who regularly read Supertrax Magazine, watch SnowTrax Television and/or subscribe to our You Tube channel you’re gonna be shocked with this news.

Need to say this right out of the gate: Thank you Yamaha! We have been one of a few media outlets who have not mixed words about how poorly the former tuner boards worked. Essentially the dual skag “tunnel” design of the Tuner Ski created huge issues with understeer and sometimes outright plowing of the front end.

Compounding this persistent suite of issues was the propensity for the Tuner to “clean out” suddenly and transition in the blink of an eye from understeer to profound, ski-lift inducing oversteer. We regularly fiddled with Yamaha’s tuners and regularly came away frustrated.

As soon as we rolled our first Stryke equipped SideWinder out of the pits in Yellowstone last spring, we felt a difference. Turning up the Winder’s formidable wick while carrying a solid measure of turbo-jam deep into a high speed sweeper proved Yamaha got it right.

The Stryke uses a single, deep keel with a rocker and a dual carbide setup that positions the runners on a common plate with a leading and trailing rod. Throttle on or off – even dragging the brakes – Yamaha’s wide spaced A-arm IFS bit like an under-fed shark all the way through the center of turns.

Particularly satisfying and definitely confidence-inspiring was the new ski’s ability to maintain strong on-center feel with virtually no darting. You can drop the throttle at over a hundred per and the front end stays laser straight, generating tons of confidence with no head shake.

Go ahead, grab a handful of brake and back it into a tight turn as you head for the next apex. At last you are in complete control of the world’s fastest production snowmobile!

There is a measure of tune-ability in the new Stryke boards. Yamaha has simplified tweaking the fore/aft angle of the skis with a shim system under the ski saddle. The rubber saddle biscuit can be biased to put more pressure on the front of the ski, the back of the ski or to have the ski level and un-preloaded.

The effect of having the ski push down harder at the front is heavier steering – something some pilots appreciate. Pre-loading the tail of the ski will produce lighter steering effort with a little more darting. We found the ski to be near perfect in its response when it was set up level with even fore and aft preload.

Yamaha is making noises they will offer the new Stryke skis in fitments for late model ARC IFS sleds. We’ll give our gold-plated recommendation to hightail it down to your Yama-store with a fully loaded MasterCard and procure a set of these excellent skis.