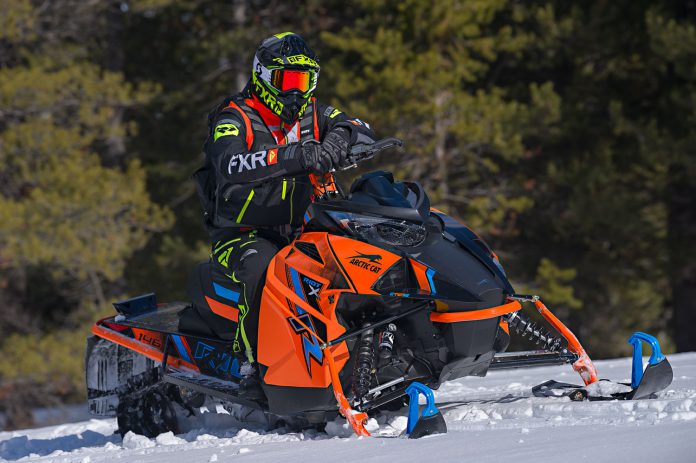 We’re calling the new RIOT X “crossover” this year’s winner of the “Mysterious Sled” award! Why?

Last year’s RIOT X, targeted at the buyer who was about 60-40 into powder riding versus trail riding, was an efficient crossover that could perform decently on the trails but really excelled in the deep stuff.

This year’s RIOT X has targeted the 90-10 ratio of riders who ride 90-percent in the powder and only use their “crossover” to get from their staging area to the hills. To call this sled a crossover is like looking at an emu with its head stuck in the sand.

After riding it, you just can’t deny this is a mountain sled with a short track and softer calibrated, more adjustable suspension.

Although our test team in West Yellowstone, Montana loved the RIOT X Alpha in the powder and the trees – and claimed it was absolutely incredible for handling due to its relatively short 146-inch track length and 2.6 paddles, they much preferred the true crossover RIOT with its dual rail suspension and shallower paddle, for trail use. It was pretty much agreed the dual rail, plain vanilla RIOT was the Polaris Assault’s best competitor.

Supertrax Onlinehttps://www.supertraxmag.com
Check back frequently for new content and follow us on social media!
Previous article2021 Switchback Assault 146 Walk Around and Overview
Next articleSome of The Best Snowmobiling Quebec Has To Offer!