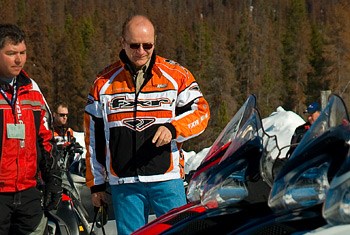 The people who market power products are in a frenzy these days looking for silver linings in the fog of the worldwide economic recession. Here’s where it gets both interesting and fuzzy. No one whose head sucks air can deny there’s been some diversification in the way snowmobilers glean information about their favorite sport.

In fact, the emergence of Facebook, You Tube, Twitter and snowmobile-specific websites has changed the way businesses get info to their customers.

We are not oblivious to this and, in fact, we participate in more varied forms of media than any other powersports publishing entity. Our sister broadcast partner, SnowTrax Television, grabs more viewers annually than all other powersport TV shows.

Our websites are powerful tools we use to enhance the messages in this magazine, the largest circulation snowmobile enthusiast publication in North America and SnowTrax TV’s 10 million-plus annual viewers.

Point is, there’s an incredible temptation to believe these alternate media sources contain some magic group of people not currently being accessed. In fact, in some corners of the industry there’s a feeling significant numbers of snowmobilers may be “falling through the cracks” if advertisers don’t promote their stuff in every form of communication.

It’s true from this perspective only: Yes, people are using variant forms of media. What is not true is the notion the groups who hang around these media variants are different from those who read and view the more traditional mediums. Go on any snowmobile chat room after a controversial issue of Supertrax (maybe this one) or a thought provoking episode of SnowTrax has aired and the chatter is about those very issues. What does this tell us?

The sales of new snowmobiles and the registrations of the aging fleet is a highly accurate and reliable tool for gauging the potential market. A good indicator of the state of the market is a quick poll of used sled sales and availability across the snowbelt.

Clearly, used iron is selling strongly, to the point we’re tracking rising prices on late model used units. This is a 100 percent sure sign the market is recovering and buyers are re-entering the marketplace.

So, is there a huge mystery pool filled with potential buyers using alternate media but not reading enthusiast publications like Supertrax? The answer is no.

Are there “returning buyers” perhaps the strongest potential periphery market right now, who are not watching SnowTrax Television at least a half dozen or more times a season? Not likely.

The reality is this: The snowmobile business is far more established than most other powersports segments. Snowmobile buyers are a much more financially stable demographic thus are more able to buy or finance a new or used snowmobile.

Snowmobilers who are active know they need a new sled every three and most certainly, every five years. These are core buyers who have held back, just a bit, as a result of the economic recession. However, they’re registering their sleds, buying trail permits and, most importantly, riding their snowmobiles everywhere there’s snow.

The mystery market is no mystery at all. We get feedback from the largest number of potential buyers year round. We know you read Supertrax and you watch SnowTrax. Many of you use our busy websites supertraxmag.com and SnowTraxtv.com to get info between mags and between shows.

The reality check for those who think this market is limitless is simply this: It isn’t. At this time in history we at Supertrax and SnowTrax TV need to clearly and concisely speak to the broadest and biggest number of snowmobilers we possibly can to satisfy the needs of our advertisers.

In case it has escaped you, we can’t do what we do without advertising revenue. To this end, thanks for your enthusiastic support for the sport’s most opinionated and largest circulated en-thusiast publication, Supertrax International Magazine.