MORE THAN ONE WAY TO SKIN A CAT 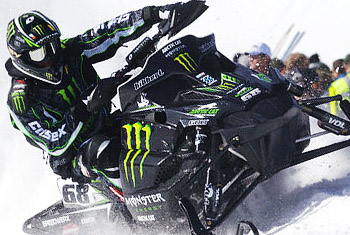 What’s your best guess about Arctic Cat’s engine program for 2012?

We’re thinking something radical is coming from Thief River Falls and we expect new 2-stroke developments in the 600 class. Why?

Cat’s 600cc consumer engine program has been pretty soft the last few years and it’s a big-selling segment with the competition.

Furthermore, the company has one of the fastest 600cc race engines in the business and its hype has been mostly wasted on the public.

We think there’s been a direct injection mill in the works at Cat for several years and it’s just a matter of product development and threading the needle between patents.

Look for a setup with an injector system on top of the cylinder head, perhaps injecting from the side instead of directly over the combustion chamber.

We think Suzuki and Cat may be combining on a pump-equipped system to build really high pressure at the injector to send fuel and air in at the same time.

This means the common system of sending air-only through the bottom end of the 2-stroke may be unnecessary.

Thus, a sealed crankcase would mean you just put oil in like a 4-stroke and change it every season.