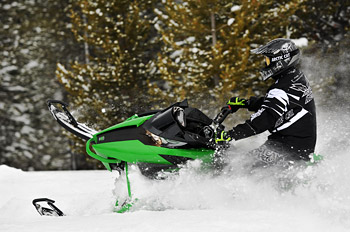 Thanks goes out to one of our supertraxmag.com viewers (see post: Arctic Cat’s New 2-strokes) who sent us a link to a website describing another possibility for Cat licensing someone else’s Direct Injection technology instead of re-inventing the horse and coming up with a system of its own for its upcoming family of USA-built 2-strokes.

This version of 2-stroke DI technology was originally developed by small engine maker, Tohatsu, and has been in use on outboard motors since 2000.

TLDI uses a compressor and a chamber to pre-vaporize the fuel and air mixture before it is distributed to each individual cylinder’s injectors via fuel rails.

One of the advantages of this system is an extremely fine spray (about 10 microns) is introduced into the cylinder at the optimum time to allow a very lean, clean burn.

All of this is controlled by an onboard computer that calculates throttle, position and other pertinent combustion data.

Apparently, these outboards produce very little smoke, idle smoothly, start really easily and make plenty of 2-stroke power. Another advantage is low oil consumption as oil is only metered into the engine as demand requires it.

Licensing TLDI is a very distinct possibility for Arctic Cat and would eliminate any cross-branding spats between two competitors in the snowmobile biz.

So far, we’re pretty sure Tohatsu isn’t thinking about getting into the snowmobile business with sleds of its own.

You can find out more on Tohatsu’s website here.