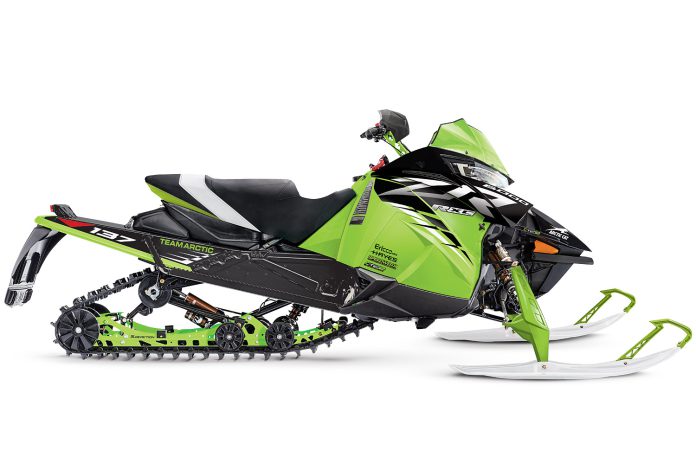 The first thing you notice about this sled is that funky notch cut out of the seat at the seat/tank juncture. That notch is a dead giveaway this is a serious cross country-ditch banger.

Although it appears to be a full-on race sled, this is actually a full production sled, not produced in limited numbers. It replaces the RR-series Cats that were very popular but takes things up the ladder a bit with more serious shock equipment and more aggressive valving.

These shocks are absolutely top drawer and comprise a significant value. We’d hazard there are likely no better shocks offered on any snowmobile model from any company in the business right now.

At a claimed 126-hp, the slot-injected 600 twin provides plenty of power and very rapid throttle response at nearly any point in its power band. The usual Cat clutching, provided by a TEAM primary and a TEAM/Boss roller secondary squeezes every ounce of power out of that 600 and makes riding the R-XC pure joy.

The best part is Cat did not go overboard with suspension calibration and by using QS3 technology, allowed you to set the compression damping as hard or soft as is needed for the type of terrain or the speed you’re riding.

Those three settings are noticeably different and allow this serious sled to perform equally well as a trail sled or as a ditch runner, with just minimal clicker adjustment.

It’s amazing, but the 6000 R-XC – which appears to be all about racing – actually can fulfill the needs of a pretty wide range of riders. It certainly falls in line with the Polaris XCRs and Ski-Doo’s X-RS models.