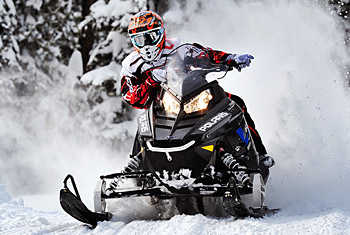 The obvious answer to that question is that one already exists – the Switchback Assault 144.

However, since the Indy is beginning to re-establish itself as the “everyman’s” sled, a 136-inch version could be a real possibility, and would be very easy to tool.

Frankly, though, we don’t see it happening. We believe Polaris has its sights set clearly on the trail riding market with the Indy and not on the deep snow dabbler.

Even in its hay days, the Indy was never thought of as an off-trail sled. Its largest appeal was to the trail rider who confirmed its success by buying multiple configurations based on the original.

We think Polaris is much more likely to extend its menu of engine offerings with the Indy and keep the track the same length. Who knows, maybe the Indy Trail will return with a fan-cooled 550 under the hood.

This would be a real lightweight and would offer an upgrade in performance over the IQ Shift 550 right away. We’re big fans (no pun intended) of this potent little mill and, despite EPA disfavor, think Polaris may continue offering it for a few more years.

Countering this guess, however, is the fact Polaris has always been slow adapting its lower cost and lower-volume-selling fan-cooled models to a new platform and the existing IQ is still relatively new on the list.

The most obvious move would be to offer an Indy 800. This makes sense because it would become a lower priced high performance model than the RUSH and would have the potential to be offered with varying shock and track combos to adapt to the demands of the market in this weak economy surrounding us.