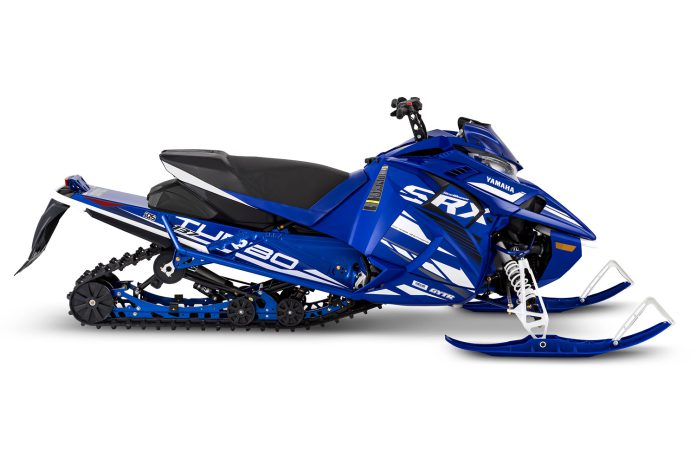 We were able to run wide open on a couple of long lakes – BTW, I registered 109-mph (176km) on the SRX’s speedometer with the suspension set on Medium and 105-mph with it set on Soft. I’m not sure why the top speed is higher when you firm up the suspension – and I didn’t try it with the suspension set on Firm. Just a guess, but there may be something in the ECU program that wants you to have a firmer suspension set-up when you’re running tall speeds. Not sure – but that would be a Yamaha kind of thing. Or maybe it was just the path I ran on the hard-pack lake.

The 3-setting suspension deal is definitely for real and once I got used to using it, made the trail part of the ride very enjoyable. I mostly kept it on the Soft setting because everything was groomed up so well, but the few times I found some chop and stiffened up the suspension, the transitions worked really quickly and the difference in ride was noticeable.

Some of our test riders don’t find the SRX’s seat height the best but at 5-ft, 9-inches, I was really comfortable with the sled’s ergonomics.

You can’t talk about the SRX without commenting on its engine performance. As I already mentioned, it generates incredible top end speed – really, nothing like it in the industry with the exception of the Cat 9000, of course.

We had a Ski-Doo 850 and a new Polaris Indy 850 along on the ride and in side by side comparisons the acceleration went like this: At 40-mph, the very fast 1.6 inch lugged Polaris would pull away hard from the SRX which felt like it was just spinning its one-inch lugged track. The Polaris would continue its lead right up past to 80-mph and then the SRX would eventually claw its way into some grip and rocket past the Indy and keep on stretching its lead up beyond the C-Note.

At higher speed roll-ons (80-mph) there was less SRX track spin and the extra horsepower of the Yamaha allowed it to pull ahead with authority.

Based on our experience, an upgrade to a 1.6 on the SRX might cost a bit of top end (How much? Maybe 3- 4 mph?) but would let the track hook up and get you way better acceleration. At the very least, some traction studs would help the situation a ton.

Some things we quickly noticed: The smoothness of this engine and roller secondary is excellent. There’s very little vibration at idle, off-idle and at trail speeds and the engine spools up RPM like it’s built by General Electric. The Yamaha roller secondary is awesome and the SRX backshifts better than any other Yamaha I’ve ridden and always seems to be right in the meat of its powerband.

We also found very little darting with this version of the Tuner skis on the SRX. Whether it’s because of a ski improvement or the lower geometry of the SRX’s sagged-in ride height, we’re not sure, but on this day, in these conditions, the sled handled like a champ – even compared to the stellar handling of the Indy.

Frankly, I totally enjoyed riding the SRX in these conditions and that’s the key. Had the conditions been less smooth and the trails in the kind of condition they usually are, I may not have appreciated the sled’s extra weight up front or possibly, its perceived suspension limitations running whoops.

As it was on this day, the SRX impressed me big-time!