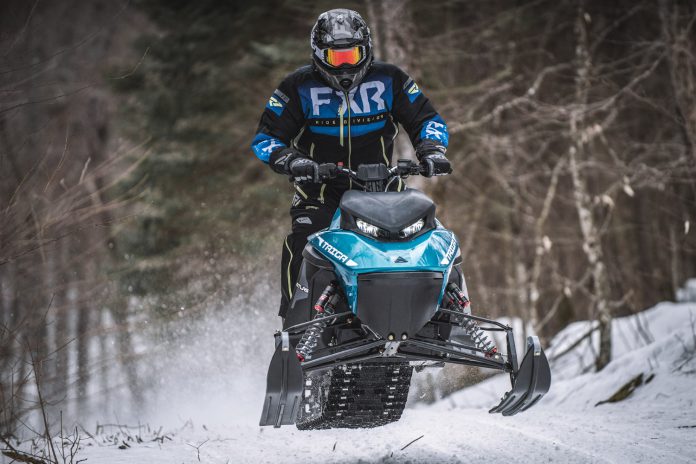 One thing’s for sure. When Taiga launched its electric snowmobile late last winter, the company opened the lid on Pandora’s Box.

Here’s why: No snowmobile OEM can afford not to watch and respond to what is going on in the automotive world.

Let’s just suppose the “Super Battery of the future” happens in the not-too-distant future. I’m talking about a battery with the potential to power a car in cold weather at least 350 miles (580 kms) per charge and with a charge time of 15 minutes.

Yep, that’s what I think needs to happen for electric power to replace the internal combustion engine (ICE).

If you make stuff that moves by ICE power you better be ready to switch a significant portion of your products to electric power. Here’s the problem: There is a ton of misinformation and blow-hard rhetoric in the general media slanted to make one think electric cars have already achieved the above performance and re-charge goals. Fact: They haven’t.

In cold weather locales like the top one third of the US and all of Canada, battery capacity is severely reduced in the winter. Recharge times are still about an hour to achieve 80-percent capacity using the most expensive Level 3 chargers. Think about that reality.

So here’s the inevitable question: BRP announced about six months ago its intention to offer an electric power option for all of its recreational products. That’s Ski-Doo, Can-Am, Sea-Doo and Spyder. A bold statement. However, achieving this goal may not be as complicated as it sounds provided expectations of battery performance are not high.

All these motorized power products offer relatively small space for batteries with the exception of Can-Am’s popular SxS models. That being said, electric motors (not engines!) require much less space than ICEs. To convert a familiar Gen-4 Ski-Doo to electric power would seem to be a fairly straightforward exercise. What it would weigh is a mystery. Taiga did not divulge any weight estimates for the Atlas or the Nomad.

Here’s my point. When Taiga landed the Atlas and the Nomad the company got the powersports world’s attention. What they haven’t even whispered as yet is the range these vehicles can achieve using a battery that arguably occupies about the same real estate as a gas-powered sled’s fuel tank.

Without going too deep into this, take a look online at how much space the batteries occupy in any current electric-only powered automobile. As a percentage of the vehicle’s total size, the batteries take up a lot of room in a car. Battery packs for snowmobiles have to fit in a relatively small location and ideally should not be heavy. Right now, that last sentence is an inescapable contradiction.

Taiga has set the bar high for any other snowmobile OEM to come to market with an electric snowmobile. However, if you stand back and look at the sophistication and refinement in a Ski-Doo ICE powered sled, it would be pretty cool to take an electric powered X-RS G4 for a good pull. Unfortunately, with today’s current battery technology we think that “pull” would be pretty short.

Seems to me everyone is standing on the sidelines cheering on electric powered transportation devices like they’re equal to and better than ICE powered comparable vehicles. They aren’t – not yet. Will they be in the near future? How much change is in my pocket? Simply put – dunno?

So, is BRP’s bold electric announcement bread on the water aimed at hedging bets a super battery will come along in the next couple years? We think it’s smart for BRP to be where it is with a dedicated EV program – at least for the time being.

However, unless the entire electric powered transportation world collectively discovers the “Super Battery”, range and time to recharge – not to mention availability of recharging – will remain powerful deterrents to widespread acceptance of electric powersports vehicles.

Mark Lester
Mark Lester is Co-Publisher of SUPERTRAX Magazine and a regular Host on SNOWTRAX TV.
Previous article2022 Ski-Doo Renegade Enduro: FOR RIDERS WHO KNOW WHO THEY ARE!
Next articleRESURGENCE OF NORTH AMERICAN MANUFACTURING