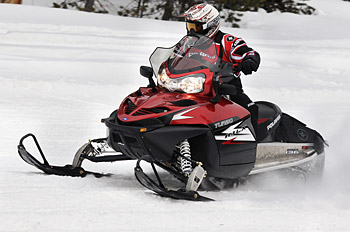 2013 was a pretty clear indication Polaris isn’t focusing on either 4-stroke or turbo technology in the future.

Actually, since the intro of the RUSH and the Pro-Ride suspension, Polaris has clearly been moving away from delivering sleds with 4-stroke engines and has cut back production of its Weber-turbo package until it’s only offered in one 2-up sled for 2013.

We’ve had press sleds of this ilk in our fleet (Turbo Touring, Turbo LX, IQ Turbo) over the last few years and have always rated them as close to the top in our preferred rides. Every single time, we’ve found them to be fast, fun, reliable and – did we already say fast?

Unless you’ve ridden one of these sleds you can’t fully appreciate the level of performance they deliver. These are hyper-class sleds with power so impressive it feels like Polaris’ rating of 140-hp is an insult.

True, the turbo is programmed to amp up the boost, producing power of about 160-hp for a few seconds when you tip in the throttle, but this engine, in any of the platforms Polaris has been using it in, is way fast – way fast.

Warning: Don’t pick a drag race with one of these sleds when you’re riding an 800 2-stroke. It takes a really good one to beat this turbo down the lake.

So what’s the deal with Polaris not wedging this mill into the Pro-Ride? We dunno. It’s probably one of the best-kept performance secrets in the biz.

Actually, from the outset, it just hasn’t sold in very good numbers and that’s probably why Polaris doesn’t put much marketing emphasis on it. We think this sled, in the right chassis package (like the Indy), could resurrect the company’s confidence in building 4-strokes.

Arctic Cat has had substantial success with its turbocharged hypersleds and Ski-Doo may decide to move in the same direction.

It just seems like such a waste to shelve this great Polaris engine package when it’s so doggone good.

Kent Lester
Kent Lester is Co-Publisher of SUPERTRAX Magazine and a regular contributor to this website.
Previous articleNOTE: CLARIFICATION IN SUPERTRAX ARTICLE
Next article5 THINGS WE DIG ABOUT YAMAHA SLEDS