IS IT TIME FOR A YAMAHA 2-STROKE? 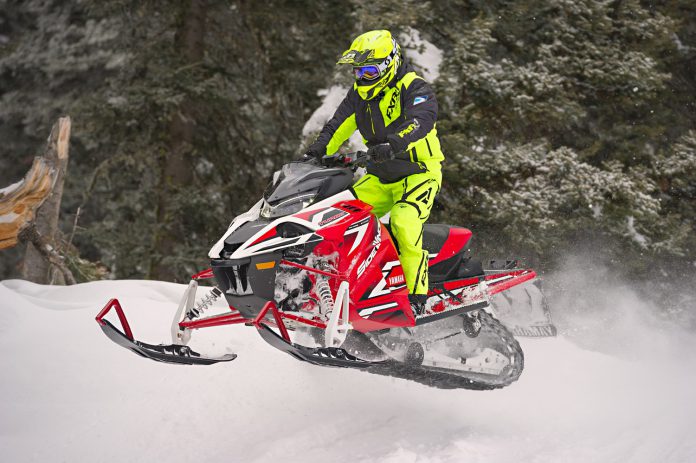 Someone actually asked us this question and, at first, we dismissed it as crazy. But then we got thinking more about it.

Back in 2003, the company made public its announcement to wean 2-strokes out of its product line and only offer 4-stroke engines in its sleds.

This was radical thinking at the time; but over the last 15-years Yamaha has proven it can be done and still maintain reasonable appeal across the snowmobile marketplace.

When that proclamation was made in 2003 there was great fear and trembling about the future of snowmobile 2-stroke engines in general.

Because clean-air technology for 2-strokes was not yet fully developed, it was logical for Yamaha to pursue 4-strokes as the prime powerplants for snowmobiles.

After all, why not take an engine type that was already proven cleaner and bypass all the development costs and time involved inventing 2-stoke induction systems to match the exhaust results of a 4-stroke?

So, it was a perfectly logical decision for Yamaha, an extremely advanced engine builder, to turn its focus away from 2-strokes and put it onto 4-stroke power.

Does this mean Yamaha has a “hate thing” for 2-strokes? Not likely.

What it means is fifteen years of product development and market acceptance has put Yamaha at a point where it feels it no longer needs 2-stroke tech in its sleds.

The problem with this thinking is that there are still hordes of Yamaha enthusiasts who would buy a revisited Yamaha 2-stroke in a heartbeat but have migrated somewhere else.

The company’s footprint in specialty markets like Mountain and Freestyle, and to some degree, Crossover, is relatively small compared to the competition.

With the snowmobile market moving towards longer tracked sleds and multiplicity of purpose, a new, clean air Yamaha 2-stroke could rock the sno-mo-biz.

Yamaha already owns proven direct injection 2-stroke patents and has a stellar history of building reliable, fast 2-strokes back in the days of yore (if anyone still remembers).

Will they do it again? Although it seems unlikely, it would not be surprising for Yamaha to flex its engineering muscles and get back into the 2-stroke business, perhaps just in the weight-obsessed mountain segment at first.

There’s a lot to be gained and not that much to be lost.