IS AN ALL-NEW TURBO ON THE HORIZON? 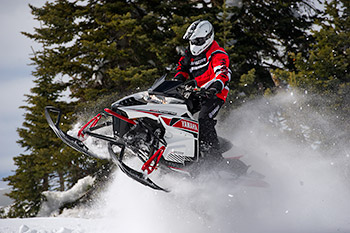 There’s always intrigue associated with the annual Snow Shoot event in West Yellowstone. That’s why the insightful and inquisitive minds at Supertrax and Snowtrax regularly uncover something juicy.

Consider this: Why would Yamaha virtually re-tool its venerable and top-of-the-4-stroke-biz 1049cc triple, making durability improvements (pistons, crank, rods) and packaging tweaks? That’s exactly what the guys from the Big Y told us.

Get this straight: The changes (which are substantial but invisible) to the engine were only evidenced on the Yamaha Vector and associated variants (some Ventures). The Viper 1049 and Arctic Cat’s 7000s are exactly as they were in MY 2015.

Equally interesting is this: The Vector’s 1049 gets an all-new induction system featuring a drive-by-wire throttle called YCCT (Yamaha Chip Control Throttle). This is a completely transparent, superb working technology you cannot perceive is in play when riding a new Vector.

However, this move to a new throttle system surely did not require a beefing up of internal components in the engine and recasting of the crankcases. So what would necessitate this kind of re-working, especially considering the 1049 is a drop-dead bulletproof motor?

Bada-bing, ka-ching! Is Yamaha about to intro a factory-built turbocharged 1049? Here’s the deal: MPI has proven the 1049 can not only take boost, it can take it all day, all season long in the Viper.

Also, the Yamaha/Arctic Cat agreement has created the need for a boosted motor to replace the current Suzuki-built turbo likely coming to the end of its tenure with Cat.

So, with these realities in play and the likelihood Arctic Cat will have a new chassis in the future built around the 1049 instead of modified to accept the engine as it is now, wouldn’t a retooling and beefing up of that engine make sense?

Here’s one more: If Yamaha and AC are going to have a top-of-the-market turbocharged snowmobile they would most certainly be targeting more power than the current MPI 1049 and Suzuki 1056 twin produce. Think 200 ponies. That would require an intercooler and beefing up the 1049. Are the pieces coming together for you?

Quite honestly if there’s not something more going on here, then Yamaha just wasted a ton of money re-tooling what is already a stellar engine.

I think you better stay tuned.