Inside at Spirit Mountain 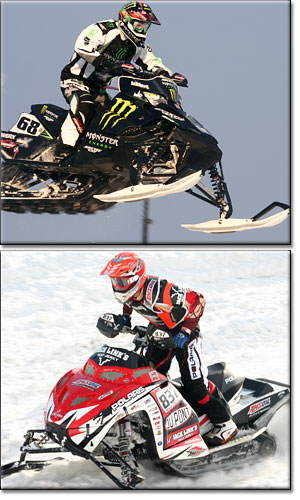 With this year’s hype at an all-time high to see the all-new race equipment from Ski-Doo, Arctic Cat and Yamaha, the Spirit Mountain crowd were completely wired to see what the new stuff could do.

On Saturday it was all Polaris with Ross Martin leading the pack in Stock Class followed by Dennis Eckstrom and a very fast, up and coming Mike Schultz.

TJ Gulla and a revived Levi LaVallee led sixth place finisher, Tucker Hibbert, to the tape. Tucker was the highest non-Polaris Stock Class finisher and rode hard to get there.

Polaris’ steady approach to refining and perfecting its IQ race chassis has paid off with solid results and there is no question Polaris will be the team to beat again this season.

The new Arctic Cat SnoPro looks very much like a Polaris on-track but features Cat’s own unique design with extremely long front A-arms and a new 600 engine that looks to have decent potential to win.

On Sunday, Tucker got a poor start in the Open Final and drove his way past tough competitors like Ross Martin, Schultz, Morgan and Gulla to lead by a wide margin. Tucker proved his reputation as an iron man as he literally willed the Mod Cat past the herd.

This guy can dominate and believe us there will be some exciting racing this season with him in the mix. Following Hibbert were LaVallee, Martin, Eckstrom, Schultz and Gulla, all on Polaris sleds.

Ski-Doo had a tough day and it appears the short prep time its riders had prior to the event really hurt the team.

Spirit has a reputation as being an early season proving ground and the Ski-Doo team was sent back to the trailer to find more power and make refinements to get back into the hunt.

Yamaha fared much worse. Its new Nytro 4-stroke race sled failed to qualify for the Open Final. Looks like more time and some tweaking will be in order for the team.

Supertrax Onlinehttps://new.supertraxmag.com
Check back frequently for new content and follow us on social media!
Previous articleWPSA, Rock Maple & CSRA Racers – Event Info
Next articleYamaha Factory 4-strokes: Round One In Duluth