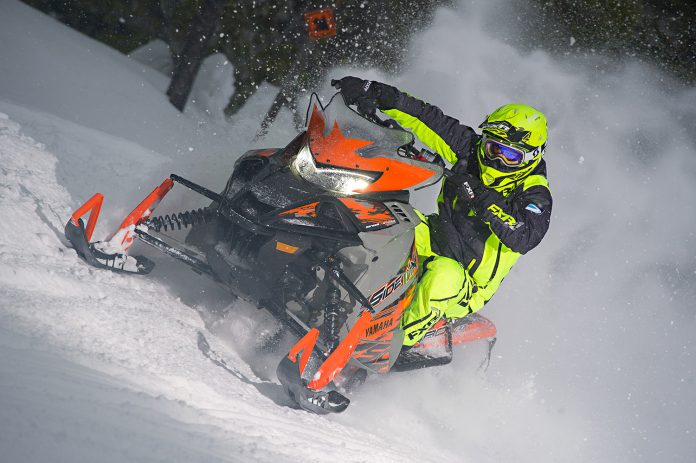 It goes without saying Yamaha’s industry leading powerhouse is a jewel-like piece of complex machinery.

Some of this complexity is because of the nature of 4-stroke design. There are cams and valves and valve springs and all kinds of assorted mechanical hardware associated with a dual-overhead cam engine like the Turbo. Add in the fact this engine is a three cylinder and you have a thirty-three percent increase in whiz-bang over even a 4-stroke twin.

We could go into detail with the design and magic of the Yamaha triple itself but it’s probably better to focus on the turbocharger.

The principle behind using a turbo is to cram-pack the combustion chamber with an abnormal amount of fuel and oxygen and then set it off. Yes, it sounds like a bomb and it actually is.

Those explosions generate incredible amounts of power considering the displacement of the engine. The turbo spins at over 100,000 RPM and 180-hp from a 998cc engine is pretty impressive. However, turn up the boost on the turbo and this same engine can produce nearly 100 more!

Although the horsepower stats are impressive, what really blows things off the Richter scale are the torque numbers. The truth is, a turbocharger is first a torque generating device and not primarily a horsepower increasing one.

This is the reason why OEMs can keep the boost low, generating far less HP than the turbocharger can potentially deliver while, even at that lower boost level, the torque has increased substantially.

This is good for long engine life and, on a snowmobile using a CVT clutch, you can gear the driveline so the torque can overcome track friction, weight and aerodynamic drag at high speeds.

What makes this engine so appealing is the way it runs. Drive a SideWinder or a Cat 9000 and it’s so smooth you almost forget how much power is under your thumb. Tip in that throttle though and all the power of the universe is unleashed.