HOW MUCH OFF-TRAIL, HOW MUCH ON? 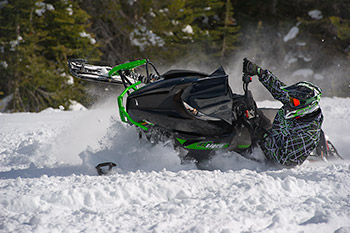 The current crop of the most popular snowmobile offerings are focusing on track length – or at least, more of it.

Arctic Cat began the shift to minimum 129-inch tracks for trail sleds a decade ago and then Yamaha followed with the Apex and then the Viper and, this year, the Vector. In MY2016, Ski-Doo is offering 129s on most of its trail-targeted sleds.

These sleds, originally labeled Crossovers, have now become standard-issue trail sled upgrades and allow riders to both trail ride and occasionally run in powder, too.

What we’re wondering, is why?

Could it be the riding habits of snowmobilers are evolving into something completely different? Certainly, we’re talking to many 20 and 30-something flatland riders who really love to run powder wherever they can find it.

It’s not about mountain climbing, high-marking or perpendicular sidehilling – their geography doesn’t always allow it – rather, it’s just about boondocking in powder for a few hours and finding some nice drifts and cornices to launch from, then resuming the day’s ride back home on trails. You could almost call it Eastern riding as opposed to Western.

Many hardcore trail riders could care less about ever riding in the fluff and just want to stick to the groomed white. No problem, and the 129-inchers seem to be extremely good for that use (frankly, we’ve been hard-pressed to note any compromise in handling with a 129 compared to a 120).

There is the weight factor and any extra track length adds pounds – but most riders seem okay with that.

An important consideration with track length is the weight of the snowmobile chassis. Surprisingly, super-lights like the AXYS and MX-Z are amazingly good in powder, even with their shortest tracks.

We think it has a lot more to do with the mindset of a potential sled buyer when they’re making a decision in the showroom.

The potential to ride off-trail when you’re cutting the check is pretty enticing. Extra track length gives you full license to do that.

Kent Lester
Previous articleAre You Riding the Most Advanced Snowmobiles?
Next articleARE YOU ACTUALLY ADJUSTING YOUR SUSPENSION?