HOW MUCH IS TOO MUCH 2-STROKE? 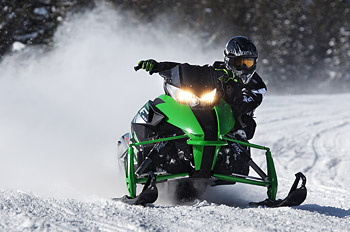 It’s been a few years since the days of 1000cc and 900cc 2-stroke production sleds. However, these mega motors are still emblazoned in the minds of a number of snowmobilers and there’s always that element out there wanting more.

Sleds like the last Mach Z, the 1000 Cat and the 900 Fusion, despite varying levels of success and delivery in their hayday, had a ton of showroom sizzle and appeal to extreme performance buyers in their day.

With today’s breed of super-clean 800s producing close to and beyond 160-ponies, it seems wrong to think buyers would be interested in anything bigger. Or does it?

Certainly, the process involved to EPA-certify new, larger displacement 2-strokes would be expensive and bothersome. This is especially true if consumers respond for only one or two years to the big powerplants and then go back to smaller big-inch rides (like 800s) again as they did before.

There’s no question the OEMs are thinking of ways to build consumer fervor into their future models. In the past, the biggest, baddest engine nearly always got the job done for them. In today’s regulated world, it’s just not that simple.

Are snowmobilers motivated to upgrade every couple of years to end up with the same thing? Not likely. Snowmobilers are addicted to fresh technology and crave the latest and especially, the greatest.

Another possibility has been offering from-the-factory turbocharging for 2-strokes. Since both Polaris and Arctic Cat have advanced degrees in building reliable turbos for their 4-strokes, it would seem like a pretty logical way for them to offer incredible horsepower in the 200 range while using existing 2-stroke engines.

This prospect brings up an interesting point. Those power-hungry snowmobile consumers who want to lead the pack with engine performance just might be willing to ante up an extra couple of grand to get what they want. Would you?