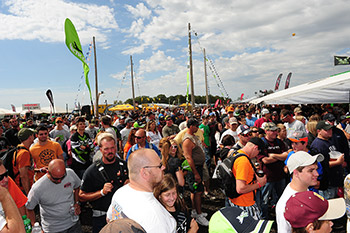 WHAT TO LOOK FOR:

Look for us, Supertrax Magazine and Snowtrax Television all weekend. Luke and AJ will be circulating the show on Saturday and will be easy to find in our booth on the main midway just up from the OEM display intersection. We’ve got entry ballots for great contests and time to talk with our readers and fans.

WHAT TO LOOK OUT FOR:

First, look for non-current sled deals like you haven’t seen in a couple years. Inasmuch as the 2014 season ended off with very little, actually record-low inventories of unsold new sleds, last year’s poor snow in both the Midwest and far-west mountain markets means a copious volume of non-currents will be on site.

These non-currents will mostly be the property of Minnesota area dealers, however, we’ve seen dealers from Wisconsin and Michigan in past years haul their late model unsold, non-current iron to Hay Days. In any case, look for some one-of-a-kind sleds with once-in-a-long-time prices.

Second, look for a fairly serious adjustment to used sled prices. There are two reasons for this: Last year’s poor weather in mid and western markets and the change in cross-border shopping.

Less demand for used sleds is the result. That means used iron values will likely be lower than in the past couple seasons. With the increase in discounted non-current new sleds and the US/Canadian dollar issue in play Hay Days should be a good barometer for used sled values in this season.

Third, clothing. Helmets, accessories and consumables like oil and traction products should be shopped at this year’s Hay Days. With the Midwest trail market and the Western mountain market suffering one of the lowest snow winters on record there will be plenty of selection at excellent prices. Look for clothing, helmets, carbides, traction products, lubricants and yes, even trailers at attractive, once-in-a-decade prices.

Remember, arrive early to get the best deals. If you’re a swapper then that’s doubly true!

See you Friday, Saturday and Sunday at the biggest, craziest and the most amazing event in the entire powersports industry – the Sno Barons Hay Days!