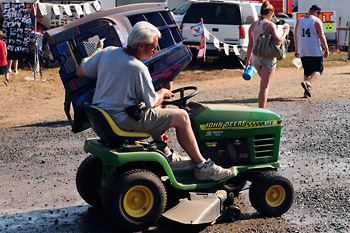 Just got back to my desk after a weekend at the annual cornfield dust fest called Hay Days in Minnesota. This year’s version featured some of the hottest Saturday temps on record – although we’ve seen it hot there before.

What was impressive was the scope of the Swap Meet. Clearly, this is one aspect of Hay Days that’s getting better every year and looked as expansive as ever. Problem? Not nearly enough time for the average swapper to see it all.

This is not good for the vendors or the attendees who travel huge miles and put up with nutsy stuff to get to the event every year. This should raise screams from the event volunteers, but we think it’s time for Hay Days to add another day and here’s why. It’s undeniable the original reason and attraction that was “Hay Days” is no longer the big event.

Grass dragging and that entire aspect of the event has sunk to probably the fourth or fifth thing people use to justify their attendance at Hay Days. Sure, watching sleds run, smelling the fuel and oil and hearing the engines scream is cool, however the biggest fastest, highest profiled classes now feature purpose-built 4-stroke turbo charged grass rails that many guys (or girls) really don’t identify with.

Furthermore, the formerly popular stock class new sled shootout barely raises an eyebrow anymore. Ten years ago the fences of the drag strip were lined with anxious, interested Hay Day-ers – today, not so much.

So why go to Hay Days? The organizers have hit the nail on the head with the now front and (literally) center stage extreme sports area featuring everything from full-on side-x-side racing to back-flipping motorcycles, ATVs and once in a while a sled.

The area is jam-packed with spectators all weekend and the booths which surround the feature area are the most desirable in the show. Extreme sports are the bomb right now. Grass drags? Grass what? Again, why go to Hay Days?

After many years of exhibiting for Supertrax and SnowTrax it’s clear the first thing people go to Hay Days for is the Swap Meet. It’s quite literally so huge you would think we was lying if we attempted to tell you its scope.

Second, people come for the deals on oil, non-current clothing, new parts, gadgets, one of a kind left-over accessories, skis and other performance bolt-ons.

Third place is a tie with the OEM sled displays and the extreme sports action that goes on pretty much all day and finally, it’s Grass Drags and the rest of us who go to Hay Days simply because it’s bad to NOT be seen there.

So what’s the future for Hay Days? Pretty bright from what we can tell. However, the event needs to offer more time for the exhibitors to recoup their hefty costs to participate.

Here’s what we mean. The extreme sports area of the show draws people away from the OEM and many of the clothing and parts exhibits whenever a tattooed and over-pierced back-flipper is about to do his or her thing. The management needs to take into consideration the effect this has on business. Why not make Friday or Saturday exclusively the extreme sports days and alternately the Grass Drags? In other words, don’t do both on the same days.

Friday is largely wasted at Hay Days with no consumer entry – the Sno Barons could sell an all-access weekend pass and make more loot. It seems to me nothing seems to draw people away from the swap meet so give them Friday as well.

The Swap Meet has some kind of magic dust (literally) that’s irresistible. From the many complaints we heard, the down side of the Swap Meet is people felt they couldn’t see it all in one day. If it gets any bigger cloning yourself will be the only way you’ll see it all in the time allotted.

There was a definite lack of non-current clothing and associated staple equipment being offered and sold as a result of the incredibly long season last year. We think a lot of snowmobilers bought an extra set of carbides last April and don’t need another – yet.

Interest in new iron was high, but the amount of non-current was visibly lower, again as a result of a long winter where riders bought sleds right into April.

So Hay Days has come and gone for winter 2013. As a barometer for the coming season we have to say the prospects of a healthy fall sled sales season seem guaranteed. Helmets off to the Sno Barons for the amazing job they do with this unprecedented, unequalled and mostly indescribable annual event.