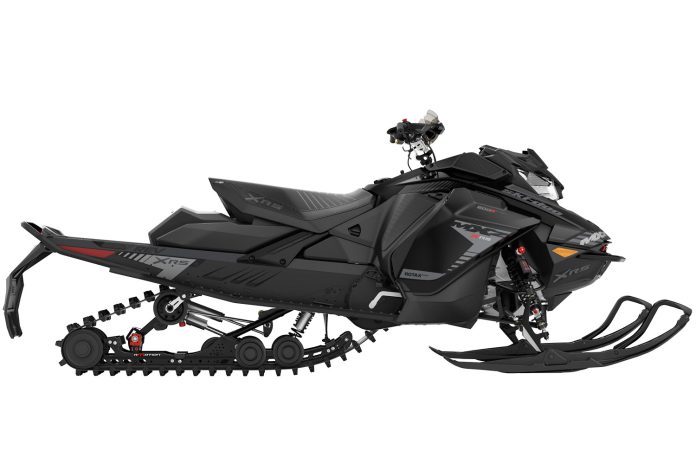 We’ve been blessed with a huge dump of early season snow at the top-secret SnowTrax and Supertrax World Headquarters and proving grounds.

November snow is not uncommon here but this much snow the middle of November is epic. As a result, we’ve been able to pile miles on a few of the PR units we’ll be riding all winter.

This sled is all about the motor. The brand new Rotax 600R E-TEC is ultra-smooth and crisp when you whack it mid throttle or just drive away from a stop.

Engagement is positive at 3500 rpm and the new pDrive primary (this is the first time it’s been used on a production 600) provides the most linear, buttery and predictable engagement of any clutch in the biz.

At trail speeds the engine is settled without being edgy – and noticeably smooth in response to incremental throttle inputs. There’s a detectable increase in mid-range torque (4500-6500 rpm) over the old Series III 600.

As revs rise the lid comes off the 600R’s civility as the intake noticeably howls from 6500 to full shift at just over 8000 rpm. It’s a satisfying and urgent wail that is, quite frankly, addictive.

Trail power feels strong however we need to mention the break-in clock is still in play, even though we’ve carded over 350 kms (210-miles) on the sled. Ski-Doo’s programmed break-in is a long and arduous affair and we often wonder if it could be a little bit shorter.

The new E-TEC system used on the 600R does not use boost injectors as does the 850. While it’s too early to get you boilerplate data we suspect the 600R is getting better mileage than the Series III E-TEC 600 it replaces.

If you’re a former 600 Series III owner and are salivating for your first pull on a new 600R I’m confident you’re going to be impressed.

This new engine is a tangible step up in power, smoothness and trail-usable torque compared to the long-in-the-tooth Series III 600.