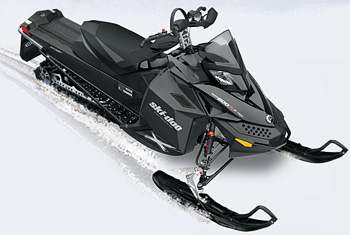 Even though there’s been early snow in some parts of the snowbelt this year (Minneapolis has had considerable snow as early as November 14), Supertrax got its first official test ride of some 2011 sleds on November 27th.

One of the first sleds we tried out was our shiny new Renegade 800 E-TEC press sled. We were pretty curious to see what the actual production version of this sled performed like because we had ridden a production prototype several thousand miles last winter.

That particular sled was a 120-inch tracked MX-Z and since our focus was mostly on the way the new 800 engine performed, we didn’t pay as much attention to chassis details like suspension compliance, realizing all of it could change when the actual 2011 was released.

Our test area for the Rennie was local trails with a new snowfall of about 8-inches of powder. The weather was slightly below freezing and cold enough to feel like real winter.

Keep in mind this brand new engine was still on its computer’s “safe mode” and we can’t expect all its power to be unleashed until we get a few hundred more klicks on the odo. Not to worry, though. This engine felt very strong and there was no appreciable difference between the way this 137-incher performed compared to last season’s 120.

Handling was very similar to last year’s Renegade as was its ride – all this to say, both were excellent. This big direct-injected 800 has a more bass exhaust sound than the 600 but runs almost identically.

Its start-up is flawless and it will literally sit and idle for days if you’re a billionaire and can spare the gas. Even that isn’t much of a problem because this sled doesn’t use much fuel even when it’s in safe mode.

To all you Ski-Doo fans out there: You can sleep well tonight knowing the XP is as good as ever and this engine delivers everything it promised!