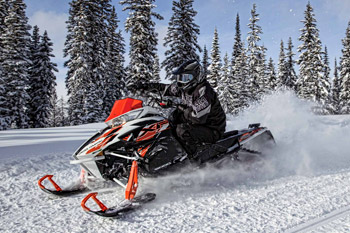 The sheets were torn off Cat’s 2015 new models earlier this week and we continue to be impressed with the company’s unrelenting desire to re-invent itself.

The broadened availability of both the new-last-year 600 CTEC-2 and the increased use of the 1049cc Yamaha triple makes for a pretty exciting 2015 model mix.

Unfortunately, according to some of our Facebook commentors, some of you are disappointed Cat didn’t come with a new 800 2-stroke this year.

Frankly, based on the number of new sleds from TRF this year (an all-new 2-upper, a bunch of variations on the 600 DSI, a new 4000 series & more), it would have been pretty risky introducing a completely new engine again this year.

Remember, it takes three full years for a new engine or chassis platform to complete endurance testing before production.

We think focus has been squarely placed on delivering the best 600 possible the last two years and the brass simply needed complete assurance the CTEC-2 would be reliable and deliver results to the consumer (you) once it was placed in the hands of thousands of users. C’mon, Cat has brought out more new models than anyone else the last two years!

Another consideration is the fact Cat is committed to building all of its new 2-strokes on US soil.

This means a lot of tooling needs to be done in the St. Cloud, Minnesota engine plant before another variation of the CTEC can be manufactured.

Meanwhile, Cat has a very fast, reliable, proven 800 it can use while development on a second DSI mill moves ahead. Yes, we think one is definitely coming – just not for a while.

You impatient commentors need to ask yourself this: Would you rather have a rushed 800 DSI or a bulletproof one?

Next complaint we heard was about the new 4000 series. This sled puts the venerable 500 EFI Suzuki to work in ProCross skin and actually delivers a very fun snowmobile both for serious cross-country riders and for trail riders.

Most important, this sled allows Cat to compete in a category it hasn’t had a lot of selection in previously.

At 84-hp the 4000 is nice performance competition for the newly successful 90-hp Ski-Doo 900 ACE and will be priced considerably lower.

Yes, there’s a ton of shoppers looking for choices in this power range and we think the new 4000 will hit the nail on the head – especially if Cat lives up to its promise to keep the pricing attractive.

What can we say about a 2015 137-inch 600 Procross? We’ve ridden this sled and are preparing a full report on it for you. Keep viewing this site to find out more.