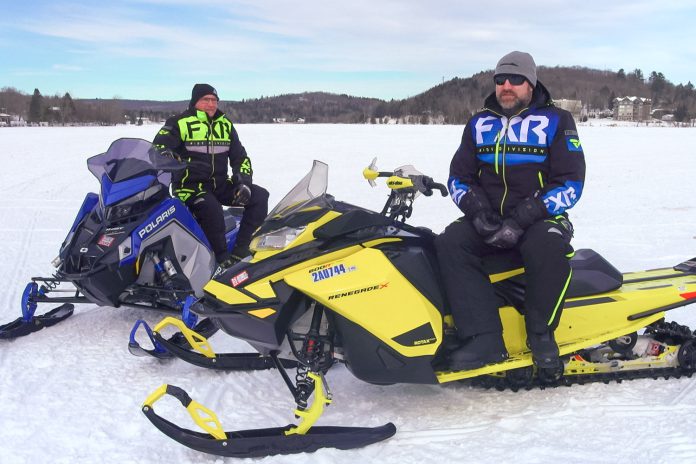 It was a cold, sunny day, the lake was frozen hard and since we had the two sleds along with us we wanted to put them through their paces.

The question had long been looming about which of the two was fastest. And if one was, which one and by how much?

We decided to evaluate based on out-of-the hole acceleration, mid-range pull-away and top speed.

After a couple of tries, we quickly concluded we couldn’t get a fair appraisal from either sled by trying to take off from a dead start. There just wasn’t enough traction on our particular lake – there had been recent snowfall, and although long stretches were nicely tramped down and by all appearances pretty hard, there was still too much track spin to get a fair comparison. We decided to do 20 mph roll-ons and allow the sleds to work where they could get the most grip.

We lined the sleds up beside each other about 20-feet apart and feathered the throttles until we reached the magic 20. One rider did a 3-count, dropping their arm to signal it was go-time. The throttles on both sleds were mashed pretty much simultaneously and the 650 VR1 pulled ahead almost a sled length and then kept building its lead by inches.

When the two got into the midrange, the Polaris shot ahead significantly. Its lead extended by at least a couple of lengths and as the two sleds approached 85-mph, the Polaris was clearly ahead and continuing to pull away.

Same routine and the same result but this time the Ski-Doo driver got a jump on the start. The Renegade pulled ahead about a sled length and then the VR1 took over. Somewhere between 35 and 40 mph its larger displacement shot the 650 past the 600R decidedly. No looking back as the Polaris continued to stretch its legs and finger-walk its lead until both riders backed out of the throttle at about 90.

Same again. This time the sleds left very evenly but the Polaris was still ahead at the end of our run. The Polaris rider commented that when he nailed the throttle each time, even though he was seated far forward and hugging the tank with his knees, the sled transferred so hard it pulled a throttle wheelie, keeping the skis off the snow about 6-inches for over 100-feet.

The results speak for themselves and although the sleds were super-close, the races ended the same – every time. The statement we have to make is this: Why wouldn’t the results end up like they did? The mathematics don’t lie. This square bore and stroke Polaris has a lot of torque plus the benefit of larger displacement. It should win and should be faster than the 600. Just makes sense.