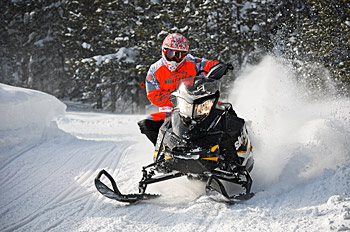 Supertrax is unique in the Powersports world as we are the only audited circulation international enthusiast publication in both the US and Canada.

The role we’re playing right now is somewhat precarious as we respond to our ji-normous Canadian circulation through emails and letters surrounding the MSRPs of new sleds in Canada.

Yes, we are aware of the disparity that exists as a result of the US dollar’s historical strength against the Canadian greenback. However, by mid-summer the Canadian dollar’s value has risen this year to actually exceed the US dollar.

In terms of OEM responses to this most recent Canadian greenback surge was BRP’s Can-Am ATV division response in July – dropping MSRPs in Canada by up to $1300.00 in direct response to the Canadian currency’s rally.

Some, not all of the snowmobile OEMs have been adjusting prices in response to the dollar’s fluctuation over the past year.

Before you gripe too much, check out the actual price you can buy a sled for, with all programs considered. Some manufacturers are using rebate incentive programs to lower sled prices while not necessarily lowering Canadian MSRPs to match US ones.

However, there is a solid outcry from the Canadian market, in particular Canadian snowmobile dealers, who see customers buying new sleds in the US with their invigorated Canadian funds.

Keep in mind, when MSRP adjustments have occurred in the past as a result of dollar fluctuations, used sled prices have invariably taken a substantial hit.

You can’t have it both ways; if MSRPs come down in Canada your trade-in will experience a drop in value at the same time.