DOES YAMAHA HAVE A NEW 4-STROKE? 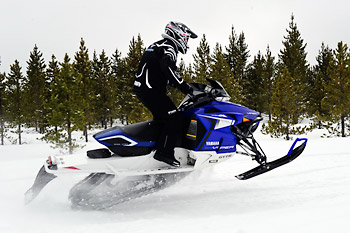 The impact of the new Viper has raised a lot of questions about where Yamaha will go with the Cat platform and its own list of powerplants.

Certainly, no one expected the Viper’s 1049cc triple to work so well in the Arctic Cat ProCross chassis. It truly does though, and that brings up the rumor Yamaha may be working on another group of 3-cylinder engines to cover more markets.

We specify three cylinders because we’ve spoken to several engine experts and they all agree the Apex counterbalanced 4-cylinder is simply too large to fit the ProCross without major retooling of the chassis. Even if it could be done (we believe it could), there’s the issue of extra weight.

By bringing a new triple based on the 1049 – likely bored and stroked to about 1200ccs – Yamaha could offer a 4-stroke hypersled making about the same horsepower as the current Apex. The advantage would be weight.

We think this is a viable guess because of Yamaha’s likely resistance to turbocharging any of its engines.

Although Yamaha has done this with factory authorized “kits” made available through its own dealers, we just don’t see the Big Y getting on the bandwagon with anything other than a naturally aspirated engine.

Here’s another crazy rumor. The mountain market comprises about 25-percent of the entire snowmobile market. It’s no secret mountain riders prefer the low weight and agility of 2-strokes.

What if Yamaha developed its own big-inch (800ccs) DI 2-stroke exclusively for mountain riding? The company already owns the patents and has the technology to do it – and it’s been well developed and consumer tested in the outboard marine biz.

This would open up Yamaha’s snowmobile appeal to a significantly larger share of the market. Yeah, we think we’re crazy, too.

Kent Lester
Kent Lester is Co-Publisher of SUPERTRAX Magazine and a regular contributor to this website.
Previous articleWHAT ENGINE IS NEXT FOR POLARIS?
Next article$180 OFSC Permit Aims To Bring In Snowmobilers