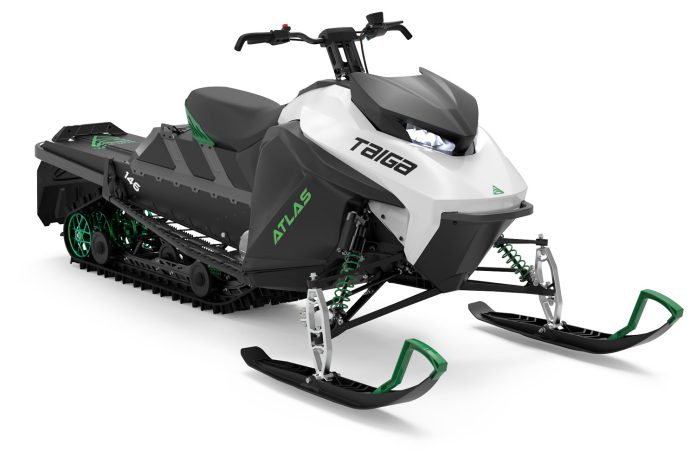 This is a tough question and one a lot of snowmobilers hope will just go away. It’s true, just like fossil-fuelled automobiles are under pressure from the electric auto lobby, the same situation could be a few short years down the road for snowmobiles.

There will be electric sleds marketed and sold this very model year and it’s unwise for riders of conventional gas-powered sleds to ignore their existence.

Here are some things we know about them:

* Electric power is very torquey and immediately responsive.
* The sled’s center of gravity can be toyed with to keep the abundance of weight very low in the chassis.
* Recharge times are getting shorter and range is getting longer.
* Overall weight is right in the range of most 2-stroke sleds – especially considering the current power offered is in the 180 horsepower neighborhood.

If you were worried before, here’s more fodder to increase your tension: There are giant steps being taken to make electric sleds even more viable.

First, let’s look at what’s being offered. So far, electric snowmobiles like the Taiga use a single electric motor and a lithium-ion battery powerpack.

What’s the deal with lithium-ion? There are a number of benefits with L-I batteries, not the least of which is their high energy density.

A conventional lead-acid battery like the one used in your pickup has enough density to store about 25 watt-hours of electrical energy per kilogram (2.2 lbs.) of weight.

A lithium-ion battery can store about 150 watt-hours per kilo. Thus, a 10-kg L-I battery can hold about 1500 watt-hours of energy and still allow the snowmobile to weigh considerably less than a gas powered 2-stroke with a full tank of gas. 1500 watt-hours is enough to give you about four hours of continuous riding – yes, even in the cold.

L-I batteries are less affected by the cold than you’d think. In fact, one of the biggest problems with this type of battery is the heat they generate both when being charged and when being discharged (ridden).

Unlike many batteries, L-I batteries computer equipped with electronic management systems aren’t degraded much when they’re cold. That’s probably why you see so many Teslas being driven in cold weather cities.

Heat is also one of the reasons charging times for automobiles take so long. Engineers are currently developing prototypes with computer management built-in that controls the heat when L-I batteries are being charged (ever notice how warm your cell phone or laptop gets when you’re charging it?).

The results so far are showing a 5X decrease in charging time using tech that constantly measures the battery’s temperature.

Naturally, there’s a flurry of research going into reducing charge times, increasing range and broadening the lifespan of the batteries needed to power electric vehicles.

Currently, in a lithium-ion battery, the positive electrode is lithium-cobalt oxide and the negative is carbon with the electrolyte usually being ether. Lithium is fairly rare and expensive but science has invested heavily in L-I batteries as a primary source of energy for everything from automobiles to cell phones.

New batteries, already over 90-percent developed using a sodium-oxide cathode, are outperforming L-I batteries by a margin of 7 to 1 efficiency – and sodium (salt), the sixth most plentiful mineral on earth, is super-cheap and not prone to heat degradation.

There’ll be a lot more to report soon!