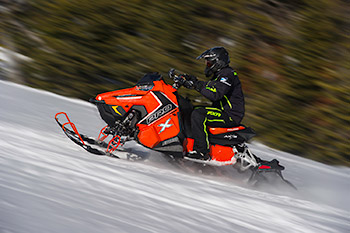 We’ve been speculating about the next generation of 800 2-strokes to hit the market.

While this is being written, we think both Cat and Ski-Doo are working on fresh 800 powerplants but we’re not sure whether these new engines will be available for next season.

We’re gambling that any new Ski-Doo technology we see will likely show up in a 600 before it does on an 800. Why? Simply, although never a cakewalk, it’s easier to EPA certify a 600 than an 800 and it gives Doo time to perfect new E-TEC technology.

Likewise, Cat has been on the threshold of introducing a new 800 for a couple of years now, ever since the intro of its amazing slot-injected 600.

Today’s 800s are making 163-hp from only 48 cubic inches. That’s a lot of efficiency and in order to get the kind of horsepower snowmobilers are demanding (we think the next generation of 800 2-strokes will be making power in the 168-70 range) there’s a lot of stress on a parallel twin this size and it definitely requires a steady diet of gasoline to both cool the engine and generate big power.

The only way to certify a big power 2-stroke is to ensure it runs super-lean all the time and uses an absolute minimum amount of gasoline and minimum quantities of oil to lubricate its internals. All the above means more heat and a real threat to the engine’s durability.

The 800 class requires the optimum from a 2-stroke, unlike the 600 class that offers less power output (125-hp) from about 37 cubic inches of displacement.

The fact the 600 class buyer doesn’t demand the kind of hyper-performance the 800 class does means 600s can run cooler, are easier to keep within EPA boundaries and generally have better prospects of living a longer life.