CAT IS SUPER-SERIOUS ABOUT THE MOUNTAINS 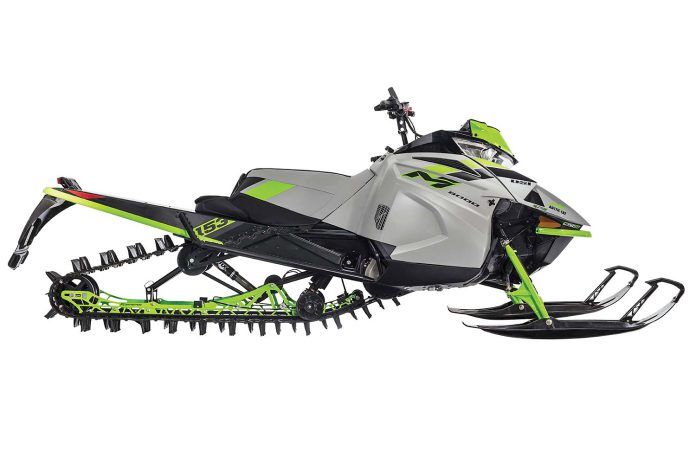 No doubt you’ve been aware that Arctic Cat has often been relegated to third place in the mountain wars behind Polaris and Ski-Doo.

It’s painful to say, especially if you’re an Arctic Cat fan, but despite the company’s best efforts, it’s M-sleds have just been a touch in arrears the last couple of years when compared to the other two.

Everything is about to change with the new 2018 Ascender M-8000 Cat just debuted a week ago. New rules now and both Ski-Doo and Polaris have been served notice.

The new Ascender is lighter. Using aluminum cross shafts and a hollow driveshaft, ounces have been shaved nearly everywhere and the result is a sled Cat claims matches the weight of its key competitors and is even lighter than some models in certain variations.

The driveshaft has been dropped 1.25 inches for a better approach angle at the front of the track and to make room for 8-tooth sprockets and clearance for a 3-inch lugged track.

New narrower bodywork is designed to aid with “paneling-out” so the sled can sidehill more efficiently, climb-out and maneuver in deep powder better. Interestingly, the overall narrowness of the 2018, including its running boards, has been a key element in weight reduction.

Probably the biggest feature of the early-release M-8000 Sno Pro is Cat’s new 800 DSI 2-stroke. This slot-injected engine is light, efficient and has exactly the kind of bottom and mid-range torque mountain riders need. There’s a critical difference here and it’s what makes the new M-Cat very competitive.

Cat’s TEAM clutch combo, with a unique idler bearing between the primary sheaves, allows perfect and immediate engagement and reduces belt wear. It also keeps the belt at its optimum placement and deflection level when you’re railing powder.

There’s more to report on this sled but just let it be said: Arctic Cat is done with riding in the rumble seat. This new mountain beast is serious equipment and has been benchmarked against its competitors to be in first place!