‘CAN YOU HANG WINNER’ IS ONE HAPPY DUDE 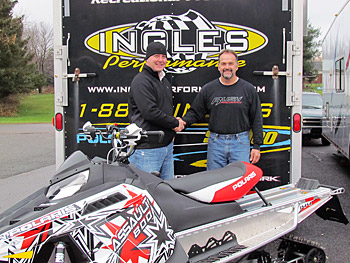 ‘Can You Hang’ was presented in co-operation with Polaris and its celebrity freerider, the legendary Chris Burandt.

The contest grand prize was an all expense paid trip to Burandt’s Back Country Lodge in Colorado. The winner, Scott Ashlaw from New York made the trip with SnowTrax Television’s Luke and AJ Lester late last winter and enjoyed being schooled by Burandt – one of the sport’s best and nicest extreme riders.

Icing on the cake for Ashlaw was the surprise awarding of a brand new 2012 Switchback Assault while riding with the crew at Burandt’s lodge.

See the absolute shock on Ashlaw’s face when Luke informs him he gets a brand new replica of one of the sleds they where riding in the mountains in the first episode of SnowTrax Television airing in December.