CAN E-TEC BE BETTER? 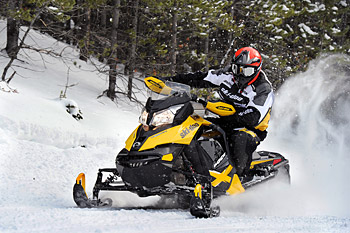 We know, it sounds like we’re going overboard with praise, but in five years the competition has only been able to get close to this kind of performance and no one has been able to surpass it – even with 4-strokes. Quite an accomplishment!

The truth is, until someone else steps up with a DI 2-stroke, Ski-Doo will continue to dominate. Here’s a tough question to ask: Can E-TEC be even better than it is now?

Some would argue this is a question that shouldn’t even need to be asked. If you’re leading, why try to improve?

We’ve noted with great respect that in the past BRP has not merely rested on its laurels and kept pumping the same stuff off the assembly lines.

It’s almost as though the company is in competition not with the, uhm… competition, but rather with itself, willingly forgoing its own technology for something better.

Case in point is the deep-sixing of the PowerTEK 800 (already pretty clean) and the SDI engines of a few years ago.

Apparently, with the E-TEC style of direct injection there’s still room for more improvement when the engineers adapt some more of the technology Rotax has already put into use in the Marine Outboard business.

The trick is in E-TEC’s stratified (highly misted) fuel charge at all RPM levels. Since snowmobile engines make huge horsepower with comparatively low displacement compared to much bigger-inch outboards, the fully stratified issue is more challenging to execute.

After multiple conversations with some of Ski-Doo’s engine people we’re convinced those issues have been fully worked out and there’s new technology sitting on the shelf waiting to be put into use on the next generation of E-TEC snowmobiles.