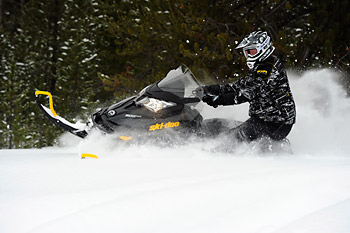 Can-Am (a division of BRP), recently announced details of its newest 4-stroke inline triple to be used in the 2014 Can-Am Spyder Roadster.

This engine falls into the Rotax ACE (Advanced Combustion Efficiency) family and appears to be a completely clean sheet of paper compared to the current 1170cc 4-TEC 4-stroke triple used in Ski-Doo snowmobiles the last few years.

Yes, the question looms: Is this the new high performance 4-stroke we’ve been rumoring is coming for use in Ski-Doo’s snowmobile line-up? Although we have limited specifications on the new engine, it appears its calling card is torque.

Certainly, with 1330ccs displacement, it’s going to have a boatload of bottom end and although we suspect this engine has gained its displacement bump from a longer stroking crankshaft, it is still oversquare with a big 3.31-inch bore and a 3.14-inch stroke.

In order to be credible for a snowmobile, its horsepower output would need to be at least 150-hp and that figure would appear to be extremely attainable based on what we’ve seen from other ACE designs.

The upside of using this engine is its claimed clean air capabilities, its lightness and its super-efficient DOHC head design. It also uses the 900 ACE’s 3-mode electronic drive-by -wire throttle system.

Based on what we’ve seen so far, the 1330 engine used in the Spyder has its gear-on-gear transmission integrated into the crankcases in one piece.

Although we can’t be perfectly sure of this until we get a better look, it would seem, if the engine were to be used in a snowmobile, there would be a recasting of the block required without the tranny attached.

This procedure is completely doable and we suspect there would be further reworking of the engine to get it into the aforementioned 150-horse range required by a snowmobile. The 1330 ACE is not making that kind of power in the Spyder (Can-Am claims 115 Spyder horsepower and 96-ft/lbs. of torque).

As it is, the prospect of an all-new big-inch ACE powerplant from Ski-Doo would create some pretty big excitement in the 2015 model year!

Check out the video below to find out more.