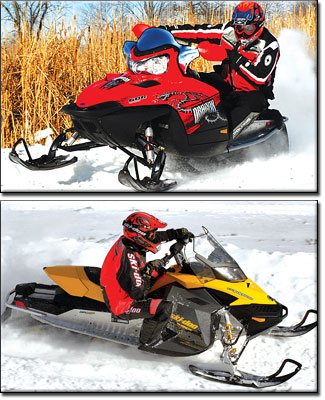 There’s no sidestepping this class. It’s the heart of the market and the competition here is intense. The nominees included both 2-stroke and 4-stroke offerings.

The Polaris IQ 600 Clean Fire 121 was almost impossible not to select for a number of reasons, not the least of which is our familiarity with this impressive snowmobile.

Its combination of near telepathic turn-in, linear, progressive handling and confidence inspiring on-center feel melds with an engine capable of making us look like heroes every time we squeeze the loud handle.

Stupid fast is what we’ve called this sled. More than once we’ve wondered if it’s really not a 700.

Intuitive in its ability to read minds on tight trails, this is the 600cc-120hp Class benchmark.

No one around here is oblivious to the amount of revolutionary innovation the XP platform represents.

We struggled not giving it BIC honors but, truthfully, we simply have not had enough experience with the sled to go that far yet.

In particular, we have not quantified the 600cc mill at sea level due to Ski-Doo’s use of insanely high altitude locales for the XP’s intro and subsequent 2008 model Snow Shoot testing.

All the right stuff is here and we think Polaris will need to be on its toes in 2009 to cover the MX-Z Adrenaline 600 SDI.

Supertrax Onlinehttps://new.supertraxmag.com
Check back frequently for new content and follow us on social media!
Previous articleBoss Racing Report From Valcourt
Next articleCat Sweeps First Round Of AMSOIL Triple Crown