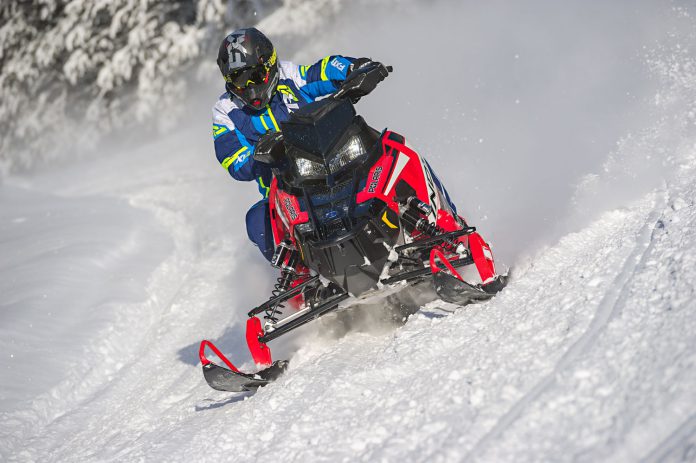 Here we go again, same stuff, different year with Kent attempting to thwart my enlightened, rational and intelligent pick in the industry’s most profiled segment: Ultra Performance. No brainer, Kenny – it’s the Polaris Indy XC 850 hands down, running away.

Of course, out of basic respect for Kent’s plight as a less informed sno-mo-journalist I will now espouse boilerplate rationale for this incredibly obvious selection in our annual brother clash.

The new 850 literally shortens Kevlar Lake, leaving the pilot time to check emails while waiting for the other 850 horde to arrive.

Next, and please pay attention here Kenny, the new XC chassis is a near-perfect melding of the AXYS front clip and the all-new Pro CC shock-in-skid full tunnel rear suspension. Pro CC raises the bar in the Ultra Performance segment.

Ride quality here is – and this must be stated clearly, legitimately comparable to the benchmark Ski-Doo rMotion with one exceptional exception.

Pro CC is coupled in such a way it allows the chassis to corner – either throttle chopped, dragging the brake to the apex or on the gas, tail out, powersliding past the exit with virtually no inside ski-lift.

Without hesitation I knight the new Indy XC 850 as this year’s Ultra Performance Best in Class winner. Kent, to disagree with me on this pic would be similar to your continual resistance to accepting that was not a foam baseball bat I hit you on the head with in 1979.