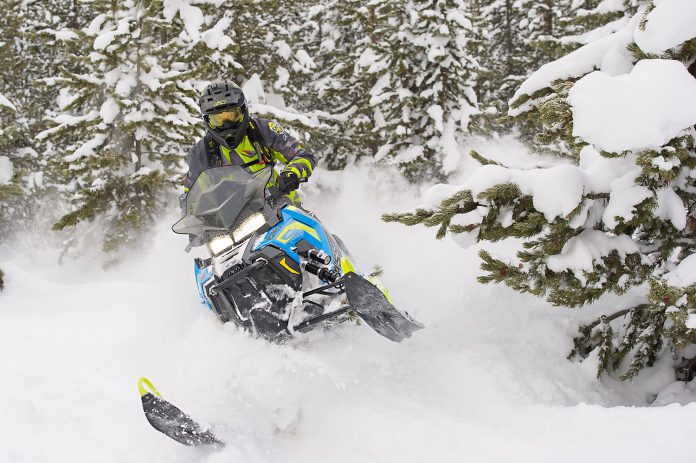 Yes, I know this is the third run of the Switchback Assault and, except for a new engine, is pretty much the same as the first one.

Mark will be on this like a crow on a dead armadillo and here’s my point: The competition has had three tries at exceeding this sled’s prowess and hasn’t been able to do it.

A combination of excellent AXYS handling and a 144-inch uncoupled skidframe that rides like a trail sled makes this version of the Assault unbeatable.

The fact we’re looking at a new powerplant is moot. Sure Ski-Doo’s 850 E-TEC throws temptation into the plan but frankly, I’d still take even the “old” Liberty 800 in this chassis over it.

By stirring-in the new Patriot 850 this year, Polaris took a giant flyswatter and squished flat all the naysayers about which sled is best.

The Assault is a true crossover and doesn’t lean impossibly toward deep snow riding focus but instead, allows those who ride flatland powder and foothills to get there in comfort without being beat-up on the trails.

Is the Assault the best in the powder? Maybe the ‘Doo 850 is a smidge better but it takes a heck of a deep snow rider to tell the diff (not Mark).

It’s all about balance and all-around handling (trail and powder) and that’s where the new 850 Assault gets the blue ribbon.

Mark knows this is true but is just is too stubborn to admit it.