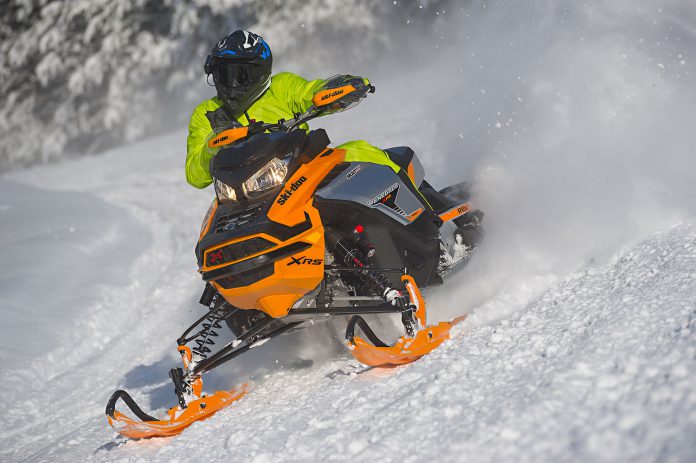 Doesn’t matter what chassis, track length or bodywork you put this all-new mill into you get the same result – excellent trail performance.

The hardcore Ski-Doo 4-stroke legion had been drooling for a re-invented answer to the venerable but somewhat long-in-the-tooth 1200 triple.

The new ACE 900 comes to market with 150-hp and we can tell you – if you were looking for an upgrade from the 1200 4-stroke, you get a significant horsepower boost – and a turbo-torque kick in the butt.

Kent likes to think he knows a lot about turbocharging since the time he hooked Mom’s 1500-watt hairdryer to the Tillotson carb on Dad’s 19-inch Clinton lawnmower.

It took off like a gyrocopter, ultimately landing in our neighbor’s award winning petunia patch. I tried to tell him about waste gates but he wouldn’t listen.

Moving on, we think Ski-Doo’s first turbocharged snowmobile engine is a hands down winner destined to do two things: First, this engine’s appeal as a 150-hp 4-stroke is already rabid in its first year and that appeal is only going to grow.
Second, I don’t believe for a moment Ski-Doo intends to stay at this power level with this smooth, torquey and potent engine. Look for more variants with more – and possibly less – power in the not-too-distant future.

There’s little doubt Ski-Doo has done its homework with the new ACE 900. It has a broad range of meaty power and demonstrates an ability to finger walk to triple digit speeds.

The engine is comparatively light, compact and quite simply, a blast to hold wide open down Kevlar Lake.