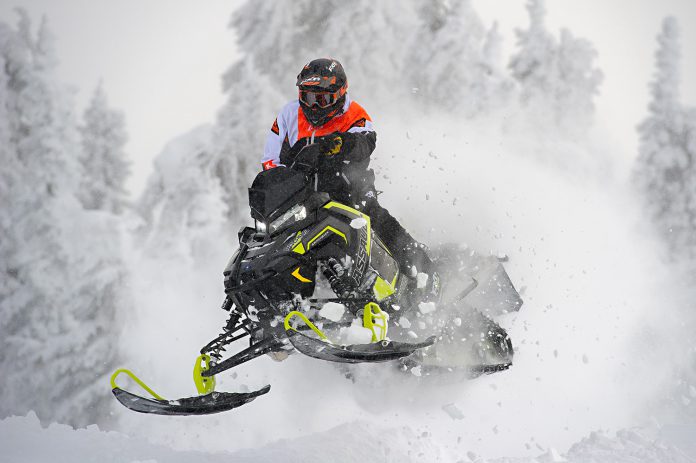 The 144-inch version of Polaris’ Switchback, in both 600 and 800 Cleanfire engine sizes, has revolutionized the category of “Crossover” in two ways.

First, the concept of a sled with a 144-inch track length being equally capable on trails and in powder simply did not exist before this AXYS-based longtracker was debuted. Previously, it was strongly believed 137-inches was the maximum length a sled should extend in order to cover both disciplines.

Secondly, the Switchback’s IGX uncoupled skidframe initially produced skepticism whether or not it could perform as well on trails as it did in the deep stuff. One ride and we were 100-percent convinced this sled could handle both types of riding without compromise.

Part of the story is the way the IGX skidframe combines with the great handling properties of the AXYS front end. It’s not stretching it to say this 144-inch sled may not work as well in the tight stuff if it didn’t have the taut handling of the 144’s non-parallel front A-arms.

All of this adds up to setting the bar high for the competition to climb over. Ski-Doo has been on it and is building a Switchback clone in the 850 Backcountry, however, it’s a new, unproven sled and it will have to reach high to match the Switch.

Yes, Mark, I’m aware the Ski-Doo has a bigger mill and a slightly longer, deeper track, but it remains to be seen if it’s enough – at least this year.