ARE ALL CAT ENGINES BUILT IN AMERICA FOR 2014? 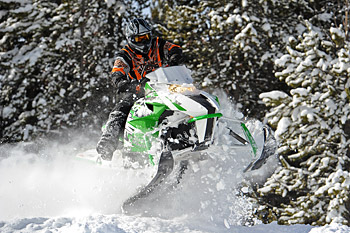 Arctic Cat has made it pretty clear it’s shifting its engine production to North America beginning this year and it’s no secret the company’s relationship with Suzuki has been wrapped up.

On the 4-wheeled side of things, Cat has been building its 4-strokes for the Prowler, Wildcat and its ATVs in a very modern plant in St. Cloud, Minnesota, about an hour west of the Twin cities for several years now.

However, we’re a bit curious about the enormous undertaking of the company to suddenly assemble every snowmobile engine in the USA and none in Japan in a single year.

Frankly, we could see a couple of the sno-mo-engines coming from St. Cloud this year, but self-building the whole fleet of everything from fan-cooled 570s to turbocharged 4-strokes is a bit of a stretch and could lead to a potential mess of reliability issues, couldn’t it?

Apparently, the St. Cloud plant has plenty of capacity and lots of room for expansion – this is a factor Cat has been calculating for several years as the Suzuki relationship has wound down.

The other thing to note here is that the ATV and SxS engines Cat has been building in the USA have been really bulletproof.

We recall when they moved the 500 class ATV engine over to the US facility, our test units suddenly went from being the slowest in that category to the fastest.

Out best guess for MY 2014 would be the company will build its well-tested 1056cc 4-stroke in St. Cloud and that Suzuki, under contract, will continue to build its 2-strokes for a few more years.

We’ll know in a few weeks so stay tuned.