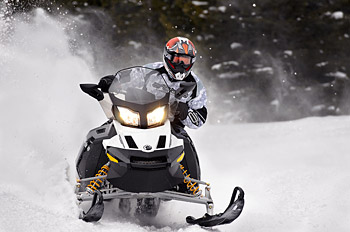 Depending who you talk to in the industry, opinions on whether or not 4-strokes are gaining popularity or losing it, varies.

It’s been ten years since Yamaha rocked the sno-mo-world and introduced the RX-1, the world’s first true high performance snowmobile. It’s been longer than that since Arctic Cat brought out the Yellowstone Special – a somewhat tame but very credible and reliable 4-stroke sled based on the old ZR platform and sporting a miniature 660cc 3-cylinder automobile engine.

Although some of the OEM’s management teams aren’t observing the sales of 4-strokes gaining ground, others feel there’s an increasing demand for these extremely bulletproof high performing engines in the future.

Surprisingly, one of the problems appears to be the 4-stroke’s longevity. Think about this: If you buy a sled with a 4-stroke and after three years the engine essentially runs as good as the day you bought it and its performance is the same or better, where’s the motivation to get rid of it and buy another one.

It’s been a fact for decades that older 2-strokes tend to offer less long term reliability (than 4-strokes) and by the time they’re 3-5 years old, may need considerable maintenance.

This is strong motivation for 2-stroke owners to shop for a new sled. Certainly with the new, leaner burning injection systems these 2-strokes have, the costs can be high to work on them.

If current reporting groups are claiming 4-stroke sales are not increasing, here’s why: 4-stroke owners are keeping their sleds longer. The potential 4-stroke buyers may have peaked in numbers simply because they are holding onto their sleds longer and are not rolling them over for a new one every couple of years.

Honestly, the last two years, in our conversations with many high performance 2-stroke owners, we’ve been very surprised at their sudden approval of 4-strokes and their intention to buy one in the next couple of years in lieu of another 2-stroke.

We think there’s plenty of room for new 4-strokes in the future and their success is only limited by the OEMs’ commitment to build more variations.