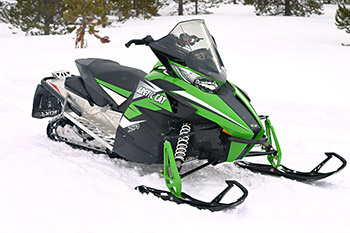 Arctic Cat has been making noises it wants to compete more in markets where small 4-strokes rule.

This is primarily the utility market and if you look at what Polaris has done the last two years with its very successful utility-targeted Indy line-up you can see how much potential there is. However, there’s also a decent market for lower-cost entry-level trail-focused iron with short-tracks and conservative weight.

True, since Polaris doesn’t offer any 4-stroke engines in its snowmobiles, nearly all those utility and entry-level Polarii are powered by the company’s fan-cooled 550cc 2-stroke.

So where does this leave Arctic Cat? The company’s Lynx 2000 series, using the elderly Twin Spar platform is a stop-gap answer to this market but probably isn’t the kind of sled Cat would like to invest zillions into basing a bunch of new models on in the above categories going forward. Weight and manufacturing complexity are definitely issues and a successful offering here would pretty much need to be a fresh sheet of paper.

It seems pretty clear an entry level trail model would need to have a lighter 120-inch skidframe and track, the utility sleds a 141 or 144-incher. Cat already has good technology with its Sliding Front Arm suspension and its super-light XF skidframe. Both would certainly be adaptable to a new chassis.

Cat could bypass a lot of start-up and tooling costs by just building a simplified version of the ProCross using a shorter 120-inch version with a lightweight, small displacement Yamaha mill under the hood.

If you’re thinking the current Phazer 500 4-stroke, it probably wouldn’t be a choice for a low cost substitute because it’s extreme performance level (80-hp from a 500cc twin) makes it a very pricey engine to build and would make the concept of a cheap 4-stroke difficult to deliver on.

To our knowledge, Yamaha doesn’t have a lower cost substitute engine on its menu right now. We’d be willing to bet both Cat and Yamaha are working on one, though.

Kent Lester
Kent Lester is Co-Publisher of SUPERTRAX Magazine and a regular contributor to this website.
Previous articleVintage Snowmobiling At Its Finest
Next articleSnowTrax Television 2015 – Season Preview