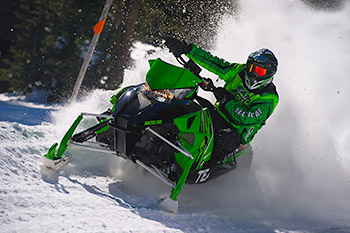 We’ve been speculating for a couple of years about an all-new 800 2-stroke from Arctic Cat.

You’ve been pretty rabid about it and there’s lots of guessing going on.

1. Arctic Cat’s relationship with Suzuki is different than it was three years ago when the 600 DSI was introduced to the press. At that time, Arctic Cat had made it very clear the Suzuki engine supply agreement was coming to a close and alternate sources were being investigated.

The time limit has passed and Cat is still using a number of Suzuki engines: The EFI 800, 500 2-stroke and the 570 fanner, also the 1056cc 4-stroke used in the Turbo and the 5000 Series are all Suzukis. Apparently there was an extension agreement drawn up and these engines are still found in the Cat stable – for how long we don’t know.

2. Arctic Cat has established a strong engine supply relationship with Yamaha and Kymco over the past few years. Without question, using the 1049cc Yamaha triple in its ProCross variations was a huge and positive move for Cat. It also looks like the Kymco 700cc twin Cat is using this year is a winner. Will either of these companies build Cat’s next 2-stroke? Doubt it.

3. Arctic Cat’s engine plant in St. Cloud, Minnesota has more capacity to build more engines and the quality that is coming out of that factory is impeccable – actually patterned to exceed what is available from both European and Asian engine builders. Case in point is that all DSI 600s have been built there from the beginning.

4. Any new 2-stroke will likely have slot injection, DSI construction and will be built in Cat’s own factory in St. Cloud.

5. It’s not always as easy as building a bigger displacement version of another engine (ie. An inflated DSI 600). Anyone who has owned or ridden an E-TEC Ski-Doo knows those two engines are completely different and both their longevity and their performance is on a very different scale.

Since a Cat 800 will have to step up and meet both Ski-Doo and Polaris performance-wise (actually, likely exceed them) right out of the gate, this engine will require much fine-tuning, testing and validation before it is released. Thus the 3-year wait so far.

6. Does Cat have a new 800? You bet it does. Will it be available soon? It may still be in the validation stages and who knows how long that will take? It could be years. Meanwhile, the existing 800 continues to perform well, has a very good reliability record and with new TEAM clutches this year, will be able to hold off the competition.

That’s all we know.