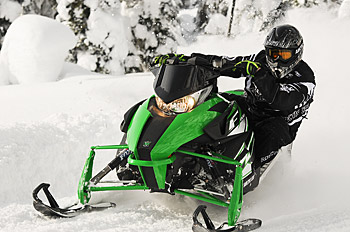 Arctic Cat’s ProCross and ProClimb platform launch is a hit – no doubters here. However, one question looms large and has been overheard as we head deeper into the fall sales season: Where’s the 600cc 2-stroke powered F-4?

The company’s move away from Suzuki as its primary engine supplier will be completed in less than two years, leaving two engine platforms, the 800cc 2-stroke and the 1056cc 4-stroke to be manufactured by Arctic Cat in its St. Cloud, Minnesota engine facility as “domestic” powerplants. Essentially, Arctic Cat owns the tools and will build those mills there.

If you draw a line through what’s happening you can see the company probably did not want to develop a DI or SDI 600cc 2-stroke with Suzuki.

We believe Arctic Cat’s capable engine division which has turned out some truly impressive ATV mills the past three years, is hard at work developing a full-on domestic 600 2-stroke to be slipped directly into the new F-4 and serve double duty as the next generation limited-build snocross and cross-country powerplant using carburetors.

We also suspect, if the company is developing a 600 2-stroke using SDI or DI technology, it will bring the same induction system to market on the formidable 800 currently in use.

In short, AC knows it needs another 2-stroke and we think it’s not far away.