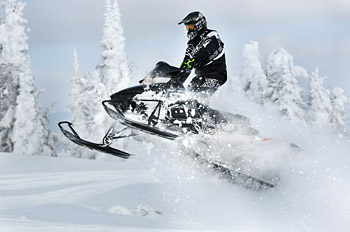 It’s more than a rumor now. Arctic Cat is coming with a new engine program and as soon as this January, the press will get to touch, feel and ride the next generation of Cat engines.

Although AC has been dead silent about details, we think the first blockbuster will be the intro of a new 600cc 2-stroke. Probably immediately following will be a 500cc de-stroked version based on the same engine (our guess is not until 2015) and then the intro of a new 800, perhaps two years from now.

We’re guessing the ramp-up of the new powerplants will be slower than expected because Cat simply doesn’t want the glitches associated with bringing out a whole new fleet in too short a time.

We also believe the new 600 will be a fairly revolutionary mill and will likely offer a version of Direct Injection. The big question is will Cat develop its own DI or will it license someone else’s?

Based on our knowledge of the costs associated with this highly technical advancement, we think the licensing strategy will be the direction Cat will go.

When all costs are weighed out, it makes sense to adopt a proven DI technology, fully developed by someone else, instead of re-inventing the wheel all over again.

Although it operates under completely different principles than Ski-Doo’s E-TEC, it is fully adaptable to snowmobiles.

Since Yamaha isn’t in the 2-stroke sled biz, it would be a good fit for Arctic Cat and wouldn’t be in direct competition.